'The Sound of Music' Hits the Right Notes at Olney 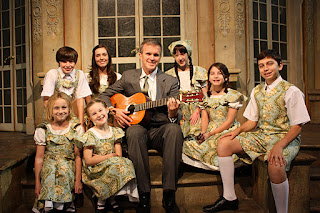 Many musicals provide a plot simply to connect the songs. In The Sound of Music the plot is as integral as the performances to the entertainment value of the show. The inevitability that Austria will fall to Nazi Germany formed the backdrop for the musical, and the improbable love between two disparate individuals was the focus.

The Sound of Music is sure to lift the spirits of theatergoers during this holiday season. The mounting of this classic at the Olney Theatre Center was a beauty to behold—both visually and through its superb score penned by the legendary team of Rodgers and Hammerstein. The book was written by Howard Lindsay and Russel Crouse.
For Oscar Hammerstein II, The Sound of Music represented his final production as he died nine months after the show debuted on Broadway in November 1959 with Mary Martin and Theodore Bikel as the leads. It closed in 1963 after 1,443 performances.
Several revivals both on Broadway and London followed and, of course, the 1965 film based on the musical starring Julie Andrews and Christopher Plummer, went on to become a spectacular box office success.
While the musical was based on true events, there were a number of changes made. As Director Mark Waldrop put it, “Biography is not drama, and Lindsay and Crouse took a number of liberties with the truth” to increase the emotional impact, humor and suspense.
The Sound of Music contains a bunch of well-known songs, such as, “My Favorite Things,” “Do-Re-Mi,” “Sixteen Going on Seventeen,” “So Long, Farewell,” “Climb Every Mountain,” “Edelweiss” as well as the title song.
The story is about a former postulant, Maria, performed brilliantly by Jessica Lauren Ball, who has been sent to be the governess of the seven children of Captain Georg von Trapp (George Dvorsky), a widower and former Austro-Hungarian Navy Captain.
He treats his children like military underlings but Maria teaches them to sing and a whole new world opens up to the kids and Maria.
The Captain had intended to marry Baroness Elsa Shraeder (Jena Sokolowski), a wealthy socialite. But differences in the way they see the imminent Anschluss—the annexation by Nazi Germany of Austria—and a growing affection for Maria doom the union.
After being shaken by the real prospect that she and the Captain are falling in love, she runs back to the abbey and listens to the Mother Abbess (Channez McQuay). She then returns to the von Trapps’ house to determine if there is indeed love between the Captain and her. They eventually marry.
Max Detwiler (Bobby Smith), a mutual friend of the Baroness and the Captain whom the kids refer to as Uncle Max is a pushy music promoter. He convinces the Captain that the kids should perform at the upcoming Salzburg Music Festival.
Meanwhile the Captain is under intense pressure to accept a commission in the Third Reich’s Navy, who as an Austrian, is loathe doing. Leaving him no choice, the Captain decides to escape from Austria and pulls it off following the children’s performance at the festival, which took place with a huge Nazi banner behind them.
Mark Waldrop skillfully directed a superbly talented and charismatic cast. All the parts and pieces moved in perfect harmony. The music, so well integrated in the show’s dramatic plot, was performed splendidly.
As Maria, Jessica Lauren Ball, who played Sandy in Olney’s production of Grease this past summer, was a standout who would triumph in this role anywhere. Ball brightened the stage with her shiny presence and her glorious singing voice. She delightfully conveyed her empathy and love for the children.
George Dvorsky, a Broadway veteran, was excellent as Captain von Trapp. He also had great stage presence, sang effectively and portrayed his character with verve.
The sisters all sang like bells—beautiful, on pitch, and resounding. The supporting actors were strong with notable performances from Bobby Smith (Uncle Max) and an acrobatic Danny Yoerges who played Rolf, the young love interest for the eldest von Trapp daughter, Liesl (Maggie Donavan). Yoerges had previously demonstrated his strong acting skills as the lead in Olney’s Farragut North.
And the children—all of them—simply tugged at the heartstrings. They were fantastic.
Scenic Designer James Fouchard should be saluted because the scenery was simply exquisite, and the set changes (13 different scenes in Act I alone) were executed flawlessly and seamlessly. Also, kudos to Costume Coordinators Jeanne Bland and Seth Gilbert and Musical Director Christopher Youstra.
This is a must-see family show. A nine year-old boy, seated in front of me and attending his first show, was celebrating his birthday with his grandmother. What a way to introduce him to quality theatre!
The Sound of Music runs through January 22 at Olney’s Mainstage Theatre, 2001 Olney-Sandy Spring Road, Olney, MD 20832. For more information, call 301-924-3400 or visit olneytheatre.org.