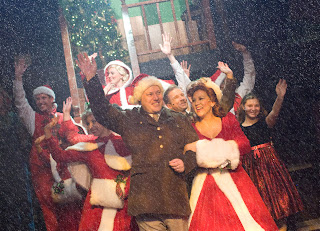 Sometimes nostalgia can be a powerful escape because with troubled times like these, no one could be blamed for harking back to a simpler, genteel era. This escape can be found at Toby’s, the Dinner Theatre of Columbia, with its completely entertaining mounting of Irving Berlin’s White Christmas.

The musical stage production was based on the 1954 movie of the same title that starred Bing Crosby and Danny Kaye as well as Rosemary Clooney and Vera-Ellen. It began as a regional production in San Francisco in 2004 and moved on to several other venues in the U.S. and Canada. The show opened on Broadway in 2008 and closed in 2009. Later that year, a revival was produced and again was short-lived but it garnered two Tony Award nominations for Best Choreography and Best Orchestrations.

The oft-recognized music and straight-forward lyrics were composed by Irving Berlin. The book was penned by David Ives and Paul Blake. White Christmas has been both praised and criticized for its simplicity. But I like simple as long as there is talent, and this production has that.

Taking any musical to the tight stage of Toby’s and in the round no less, is a daunting challenge. But just like so many other musicals in Toby’s long and distinguished history, this production of White Christmas met that bar and then some.

A superb cast directed by David James and Larry Munsey (both played the male leads, Phil Davis and Bob Wallace, respectively) led the audience in a delightful trip down memory lane with so many references to the 1950’s you may think you were in a time machine. Younger members of the audience, including those young cast members, would probably not understand all those allusions and quips from days of yore, but the music and choreography seem timeless and upbeat. It didn’t hurt that the first number was that Christmastime standard “Happy Holiday” that had you humming from the get-go.

The show opens up, however, not in the 1950’s but 1944 where Bob and Phil, then two GI’s, were singing and dancing to cheer up the troops stuck in war-shattered Europe on Christmas Eve. It is here the title song “White Christmas” first appeared in the show.

The next scene takes place 10 years later at the Ed Sullivan Show where the fellas continued what appeared to be a successful song and dance act and reprised “Happy Holiday” and “Let Yourself Go.”

From there the guys—skirt-chasing Phil Davis and his buddy Bob Wallace—pursue Haynes sisters, another singing duo. Judy Haynes played by Julia Lancione and Phil hit it off early on despite Phil’s wandering eyes. Betty Haines (Janine Gulisano-Sunday) and Bob struggle to connect.

They travel to a Vermont lodge owned by the guys’ former Army commander who has fallen on bad luck, General Henry Waverly (Samn Huffer). The gals were on their way to perform in a Christmas show. We’ll leave it there as the familiar 1954-type theme boy meets girl, boy loses girl, boy gets girl back provides one of the key threads in the show’s plot.

Larry Munsey as Bob was likewise fabulous. He showed off his big, strong voice and great acting chops, which he carries out with flair. When he and the superb dancing chorus performed “Blue Skies” to close out the first act, the audience nearly leapt to its feet. Munsey is a venerable performer and director at Toby’s, and his role as Edna in Hairspray, as an example, was superb. He was also the Costume Designer, and the costumes were magnificent and numerous.

Another Toby’s veteran is David James. The two-time Helen Hayes winner played Phil beautifully with fine singing and dancing performances, and he adroitly threw in his well-timed, clever lines.

Both Janine Gulisano-Sunday and Julia Lancione as the Haynes sisters shined brightly and played off the male leads with precision. Vocally, one couldn’t ask for better.

The remaining actors did a creditable job, and there was excellent chemistry among the company. The dancing chorus or Ensemble hoofed it up skillfully with lots of energy and graceful movement to the tuneful songs. Credit Choreographer Paula Lynn for designing the playbook so effectively allowing the dancers to show off their talents on a tight stage.

Veteran Set Designer David Hopkins also deserves a pat on the back for his work. The cute train car used in the scene where the guys and the sisters were traveling to Vermont stood out.

And I would be remiss if I didn’t mention Music Director Pamela Witt as well as the accomplished three-piece orchestra for bringing to life Berlin’s magical score.

Popular standards, such as “Count Your Blessings Instead of Sheep,” “I Love a Piano” and “How Deep is the Ocean” were wonderful. The Finale had the entire Company singing “White Christmas.” Then as an encore number, they all performed “I’ve Got My Love to Keep Me Warm” as snowflakes drifted down from the ceiling.

This is a special show for a special time of year, and a good one for the entire family. And bring an appetite.