What a Difference a Year Makes! 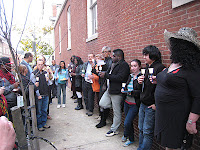 Last November 20, Baltimore was among the many cities that participated in the 12th Annual International Transgender Day of Remembrance (TDOR). The proceedings took place mainly at the First Unitarian Church of Baltimore on Franklin and Charles Streets although there were several other related events around town.

This happened only a year ago, yet it seems like eons considering what has transpired since. In 2010, a few dozen trans-activists, supporters and city officials attended TDOR. There were a number of heartfelt speeches given, workshops on key topics, town hall-style meetings, enjoyable musical selections, and a bounty of food. It was followed by a moving candlelight vigil outside the church whereby there was a reading of the names and brief biographies of transgender persons or those perceived to be transgender who had died as a result of hate and prejudice.

Much of the discussion at TDOR centered on violence that target transgender individuals, homelessness, police harassment, discrimination, the effects of HIV/AIDS on the transgender community and other concerns. I recall the passion of Sandy Rawls, Kevin Clemons, Donna Plamondon, Jean-Michel Brevelle, Bill Palmer and others who dedicated themselves to this moving experience as well as the extraordinary concert given by Tona Brown later that evening.

TDOR 2010 was mostly a reflective, emotional experience and an opportunity to hold a conversation on important issues. There had been few victories to tout. Most notably in November 2002, Baltimore became the first jurisdiction in Maryland to prohibit discrimination in employment, housing, public accommodations, and credit practices based on gender identity or expression.

There is no statewide statute offering similar protections, and such attempts have been unsuccessful since 2007 and continued through the 2011 General Assembly in Annapolis. Nonetheless, a bill introduced during the 2011 session to protect Marylanders from discrimination in housing and employment based on gender identity advanced further than ever before.

The decision to exclude “public accommodations” in the bill was a tactical political decision, which was aimed at increasing the odds of passage. It fell short anyway, and the controversy surrounding the language of the bill, HB 235, sharply divided the transgender community and its supporters.

Upon completion of the 2011 session, the prevailing feeling was that efforts to ensure transgender rights in Maryland will have to be amped up. Following the near collapse of Equality Maryland, a new group, Gender Rights Maryland, was formed to push for new legislation in 2012.

On April 18, 2010, a seminal event—horrific to be sure—took place that probably changed the dynamics and altered the trajectory for achieving rights for transgender individuals. Chrissy Lee Polis, a 22 year-old trans-woman, was an unwitting hero in the cause. She was caught on video being pummeled for what seemed like an eternity by two young women—one a 14 year-old—in a Rosedale McDonalds.

As the shocking video went viral, emphasis was dramatically placed on the need for protections for transgender individuals and garnered the attention of elected officials. Governor Martin O’Malley promised to work with lawmakers to achieve those protections based on gender identity.

A community vigil and rally was quickly organized and took place a week later outside the McDonalds. It drew over a hundred activists from the LGBT community, allies and media. And the perpetrators of the assault were brought to justice with the adult, Teonna Monae Brown, sentenced to five years in prison.

With the wind at its back, the transgender community should finally see a much-deserved legislative victory in the form of a comprehensive bill in 2012. No one can predict the outcome, but I’m one who believes the governor will sign the measure into law, and it would withstand a possible petition to referendum.

Unlike the issue of same-sex marriage that will also take place next session, transgender rights do not bring to the debate much in the way of religious dogma. There are no organized groups, to my knowledge, that have been formed to fight the end of discrimination against a marginalized segment of society.

In Howard County, a sweeping bill has been recently introduced in the county council by four of the five council members. Therefore, it will be interesting to see what, if any, opposition forms and could be a gauge as to what to expect in Annapolis next year.

So as we approach the 13th Annual Transgender Day of Remembrance, there is a renewed hope that wasn’t evident last year that important progress will be forthcoming. But we will not forget those victims that paved the way for this progress.