Would Obama’s support for marriage equality affect the referendum battle? 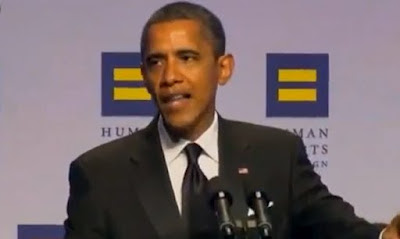 A recent story in the Washington Blade suggests that President Barack Obama may be publicly proclaiming his support for same-sex marriage before the election. Citing an “informed source” who spoke to the Blade on the condition of anonymity, “active conversations” are taking place between the White House and the campaign about whether Obama should complete his evolution on marriage and that the chances of his making an announcement are about 50-50.
The Administration, the source noted, would like to roll out another LGBT initiative before the November election, and support for marriage equality would certainly qualify. But there are political concerns that need to be addressed, especially how such an announcement would be received in battleground states. “We’re talking about the Michigans, the Ohios, the Illinois of the world; the real battleground states in which voters are already conflicted and may factor this into their judgment,” the source said.
In what is shaping up to be a tight presidential election, to say these calculations are significant would be a gross understatement. There are myriad factors that can affect the outcome of the election over the next seven months. The economy for sure will be front and center. And tied to that are rising gas prices and how the president is viewed as a result. Then you have international economic concerns as well as geopolitical tensions that could alter the domestic political landscape. And thanks to the GOP candidates, social issues, particularly those that impact women’s rights, have found a renewed place in our politics.
The president’s decision to express his support for marriage equality will depend on his standing in the race at the time as well as his considering the risks with blue-collar Democrats and Independents in swing states against the rewards of mobilizing a portion of his base.
To be sure, Obama’s initiatives in support for LGBT rights have exceeded any other administration in history. The repeal of ‘Don’t Ask, Don’t Tell’ and his opposition to defending DOMA in Federal court are landmarks of his first term. Nobody will be shocked—not even in the battleground states—that Obama takes a positive stance on marriage equality given his pro-LGBT record. He would only be following a trend in the country that indicates increasing acceptance of marriage for same-sex couples.
So, if the president makes that leap and announces his support for marriage equality, how will this revelation play out in Maryland?
An independent poll conducted by OpinionWorks of 601 registered Maryland voters from March 16-19 was telling. (For complete results visit here.)
It shows a slight tilt towards opposition to marriage equality (3 percent) but within the margin of error. Therefore, it’s a dead heat statistically—split evenly among voters—although the intensity levels favor marriage equality opponents. For example, 37 percent of those polled “strongly” want to repeal the Civil Marriage Protection Act that had been signed by Governor Martin O’Malley on March 1. On the other hand, 31 percent “strongly” support the law.
Beneath those results there are numbers that cannot be ignored. In Baltimore City, the state’s most populous jurisdiction, voters oppose marriage equality 49 to 35 percent. And among African-Americans statewide, those who oppose the law outweigh supporters by a margin of 48 to 29 percent.
To be sure, the polling data contain other breakouts, such as frequency of attending worship services, jurisdiction, age, gender, and party affiliation. For instance, weekly churchgoers oppose the law by 58 to 28 percent. Voters on the Eastern Shore are heavily against the law by 72 to 14 percent. And those over age 65 oppose marriage equality by 54 to 32 percent. But women favor the law over men by a solid 47-33 margin. And Democrats and Independents out-support Republicans 46 to 26 percent.
But with African-Americans comprising nearly 30 percent of Maryland’s population, many believe that group should be the focus of a strategy to defeat the referendum. If a fair number of churchgoing African-Americans can be convinced to support the law, it could result in a victory for pro-marriage equality advocates.
Steve Raabe, President of OpinionWorks, told me that because the polling data reveal a close contest, any major action to change the current dynamic could result in the defeat of the referendum effort. He said if President Obama were to publicly embrace marriage equality, it could influence those African-Americans who are “soft” on the issue.
“It is likely that people with the strongest feelings on this issue have already declared
themselves, so that the referendum battle will be waged over the small number in the middle who may be coming out to vote in the presidential race, but for whom this issue is not do or die,” Raabe said in releasing the poll.
Raabe also suggested that if religious leaders of all races but particularly African-Americans would overtly defend marriage equality, it could convince enough voters. Governor O’Malley could also be beneficial if he vigorously campaigns for marriage equality as he did in the legislature. And if some “mainstream individuals with broad appeal and stature” would publicly declare their support it could help swing the vote favorably.
But the real game changer could be President Obama. His re-election attempt will drive a large number of African-Americans to the polls. For those who aren’t motivated by deep-seated religious convictions, his “evolution” having been complete could convince those uncertain voters in sufficient numbers to allow marriage equality to stand in the Free State.
Posted by Steve Charing at 12:00 PM