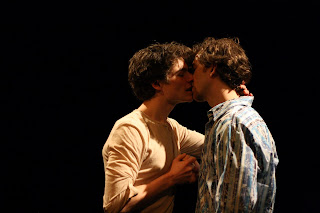 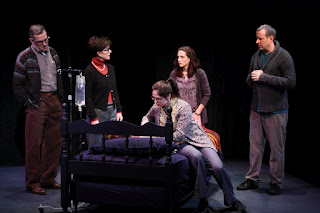 The Baltimore-based Iron Crow Theatre Company that brought us such works as Hedwig and the Angry Inch, Swimming in the Shallows, and Love and Human Remains proved convincingly that you don’t need an elaborate set to mount a top-notch play. In fact, in The Soldier Dreams, the only piece of scenery offered is a single bed on the Theatre Project’s stage. But while the set may be sparse, the stage is filled by the talents of the superb cast and an engaging story.

Iron Crow’s Artistic Director Steven J. Satta-Fleming deftly directed Canadian Daniel MacIvor’s play and captured the audience’s attention with a riveting one-hour production that alternated between the sadness of a dying young gay man and the sometimes humorous interactions of his family members as they come to terms with their loss and their conflicts within their own world.

The dying man in a coma is the beloved David (Alec Weinberg) who, by dint of his charismatic lively personality as well as his penchant for dancing, all family members believe as individuals that they were most important and closest to him. Through some deceit on David’s part, he allows them to feel that way. The “soldier” reference in the play’s title pertains to David’s ongoing war against homophobia and his struggles with his family.

An uptight sister Tish (Marsha Becker) and her nerdy husband Sam (Steve Sawicki) along with the younger free-spirit sister Judy (Karen Crighton) invade the home of David’s devoted lover Richard (Joseph Ritsch) to not only dote over David but also to reflect upon the relationships they have with one another and with David himself. Throughout the play, David lies on the bed unseen by the audience, comatose. But while dreaming of his secret life, David still manages to utter individual words depicting events that were important to him but a mystery to the family members hovering over him.

These words come to life as the “dream” David (Paul Wissman) appears in out-of body form to portray the evolution of an encounter he had with an attractive German medical student (Rich Buchanan) while he was in Ottawa the night before Trish and Sam’s wedding. The significance of this tryst is not clear, but it demonstrates the dreams David is having while in the coma are more focused on this episode—a one-night stand—than his more complex relationships with family members or his current partner. His interaction with the student displays a good connection though the dialogue is largely presented by the actors’ looking straight ahead to the audience and not each other.

As each family member looks inward to assess his or her own special bond with David, they perform separate monologues, often funny, that are delivered directly to the audience. And although different in the way they each open their hearts, they all have a common thread. This enlightens the audience as to the depth of each character, and they all do it well.

The actors are as believable as they are proficient. There were no over-the-top interpretations of the play, and Satta-Fleming should be credited for maintaining the evenness necessary to capture MacIvor’s blend of melancholy and sunshine.

Iron Crow veterans Joseph Ritsch, Paul Wissman and Marsha Becker were standouts. They were ably supported by Rich Buchanan, Steve Sawicki, Karin Crighton and Sarah Lynn Taylor as the Nurse who was attending to David. And yes, Alec Weinberg, playing the role of the reality David, was quite effective in being the family members’ centerpiece in the play.

A special nod goes to Ritsch because the audience could easily identify with what he was going through. His impatience and utter frustration followed by reconciliation with David’s family members were on target; he played the role perfectly.

The lighting, designed by Conor Mulligan and Daniel Ettinger, smoothly set up the scene changes with the needed darkening of the stage when the actors stepped forward away from the bed.

The cause of David’s illness was not explicitly disclosed. Yet the audience is led to assume that he was dying from AIDS. “I reject the categorization of The Soldier Dreams as an ‘AIDS play,” said Director Satta-Fleming. “It is no more a play about AIDS than The Wizard of Oz is the story of a cyclone. AIDS is merely the dramatic device that confronts these characters with loss.”

The Soldier Dreams is a flawless, well-acted and expertly directed production. It’s highly recommended. The play runs through April 21. Tickets can be purchased here.

Next up for Iron Crow is Adam Bock’s Typographer’s Dream from May 31 to June 16 at Johns Hopkins University’s Swirnow Theater.

I saw the play on Friday at preview night. Absolutly loved it. It was funny and sad. I would also like to mention the original music by Michael Perrie. Great job.