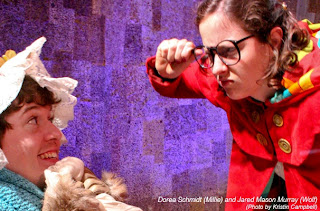 It’s always a roll of the dice when you bring children under age 10 to the theater. You never know if the action on the stage will keep them interested or will they be fidgety. A dandy little production of Red Riding Hood: A New Fable, being served up by Olney Theatre Center Institute, the education division of the Olney Theatre Center, kept those kids well entertained.

In bringing children’s programming back to the Olney campus, Education Associate Michael E. Kelly wrote a neat one-hour adaptation of the popular Grimm Brothers tale that featured versatile performances by three young actors. The entire show, which is geared to children from ages 3 and up, was produced by the intern class of Olney Theatre Center, and it appears these up-and-comers have a bright future in theatre.

Frequent interaction with the audience kept the children focused on the story that centered on a bookish six year-old named Millie. Even before her first day in the first grade, Millie had read more books than most adults. And this unique interest for such a young person made it harder for her to fit in with her peers and for making new friends. She resorts to reading books as an escape.

As a school assignment, Millie must write a presentation on the fairy tale Little Red Riding Hood, and through imagination, she becomes a part of the story. She ventures from her familiar terrain of nonfiction to a world of fantasy. “Millie/Red weaves in and out of fantasy and reality, linked by the pages of the stories we grew up with,” says Casting Associate Ashleigh Millett, who directed the show.

The actors showcased their developing talents by demonstrating their versatility. All were very effective in their roles and they, as well as the Production Staff, used this opportunity to progress in the development of their craft.

The Olney Theatre Center should be commended for presenting a fun production such as Red Riding Hood for children, which should keep them interested in theatre. It bodes well for the future of this genre and the arts in general if kids can enjoy their experiences watching actors perform on stage as well as appreciating the technical enhancements of lighting, music, sound effects and costuming. They will learn to value the work of directors as they become more experienced members of the audience.