Shane Messick: A Model for Pride 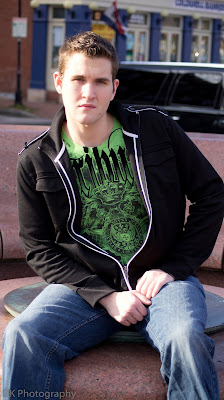 Upon his graduation from CCBC-Essex earlier in the month, Shane Messick can reflect on the journey he has taken during his young but full life.  He’s had to overcome a number of challenges, and at this point in that journey, he is so comfortable in his own skin that he wants to be a role model for others.
It started out rocky for Shane though.  His father came out as gay while Shane was 5 years-old.  That disclosure upset his mother very much and his parents divorced, costing the family their home.  They moved in with his grandmother in Essex, Md. where he lived most of his life.


“My family did not like that he got married and had kids knowing he was gay, but as I got older I realized he had to try and live a lie, and times were much less safe then, than they are now,” Shane told Baltimore OUTloud.


He hated his father for being gay because it meant he had no father living at home. “Ironically, at 14 when I came out as gay myself, I realized like father, like son.”


But having a gay dad made it easier for him to come out to his mom.  “I was a bit unsure how she would take it but it was a very simple coming out. I did not have the beating-around-the-bush moment. I think I told her within a week of my realizing it.”


Shane, now 22, feels lucky about that experience.  “My mom and grand mom have always loved me, and when I first came out I was very in your face about my sexuality, so they worried about my safety and tried to limit how much I expressed it. As I got older I calmed down and things were fine.”  Even though his oldest brother does not like that he’s gay, Shane says that he would be one of the first to help him out and keep him safe.


But his mother continues to be a huge supporter and had appeared on YouTube with Shane as the supportive mother of a gay son.  She and his grandmother once went shopping with Shane for “drag clothes” and accessories for his first drag performance at “So You Think You Can Drag.”  Beaming, he says, “I was told I placed third so we must have shopped right!”


Shane says his mother is amazing.  “She is one of my best friends, I can talk to her about nearly anything, and I only wish every other person got to feel that way.”


His physical appearance was an obstacle for him early on, but no longer.  “Growing up I was the chubby awkward kid that everyone loved to hate. As I got older I thinned out and became a lot more popular.”  Indeed, Shane evolved into a handsome, tall, square-jawed lad with a mega-watt smile.  And people noticed.


After trying his hand at theatre early on, he found a new outlet.  Last October Shane was signed as a model and actor by L&M Modeling and Talent Management.  This was something Shane had never imagined possible given that he grew up chubby.   He has done some promotional work and was a “Top Ten Cover Boy” contestant for Metro Weekly.


“My goal is to be an actor, a full time actor and not struggling. I want to be in feature films, nationwide commercials, leading TV roles. I have gotten to do some pretty cool things so far as an actor. I was in a nationwide commercial for a Zombie 5K race called ‘Run for Your Lives.’ I was also in a WWII National Geographic special airing later this year, and I was in a feature film called Jamesy Boy coming out next year I believe.”


Currently he is in a web series called Rebels and Rejects, directed by Aaron Smith.  He plays the role of Lucas, a gay student in high school.  He is also the Assistant Casting Director.


Shane loves all that but Glee is his current dream. He auditioned for The Glee Project four times, even made semi-finals in Season 1 but did not make the show.  Shane would also like to be in horror movies and be a victim that has to fight for his life but is killed toward the end. “I feel a scene like that shows many emotions, and I know I could do it. I want to be the role model for all LGBT youth by giving a lot of attention to those fields as a celebrity.”


And Shane wants to perform that mission as an activist.  “In high school I was in our GSA, and I always was very outspoken about myself and I never liked seeing people bullied. We all do it at some point but going through the bullying that I did, crying every night because you will wake up and go back to hell... I would never want anyone to go through that.”


At CCBC-Essex he discovered the LGBT Rainbow Club.  He was elected vice president and became president a year and a half later.  The group participates in the National Day of Silence and Coming Out Day.  Shane’s mother appeared as a guest speaker before the club.


“After the Chrissy Polis attack we had a film on transgender education, and in Pride 2011 we walked with two themes (No TXT N DRIVE, and Transgender support).”  His biggest accomplishment as president was organizing “Drag-U-Cation”—an event that focused on creating understanding for the drag community through a drag show and a Q&A session.


“We had local queens from Baltimore (Sue Nami, Anita Minett, and Anastasia) and we were able to have Jessica Wild from Season 2 of RuPaul’s Drag Race perform as well. We raised money for HIV/AIDS research and sent a check for over $430 to AmFar.”


The goal of the Rainbow Club was to foster equality throughout the campus and it ventured into the issue of same-sex marriage.  After a presentation by Marylanders for Marriage Equality, Shane created a Facebook event to vote YES for same-sex marriage this November, and has currently over 500 attendees.


“Our college awarded us best club program for the three years I was at CCBC-Essex. I will miss being such a big part of activism on campus. Outside of college, I was on a collab channel I started called  “7DailyGays” to try and help the youth. I think I will always be involved as an LGBT activist in some way, shape or form.”


Shane would like to see more accepting parents and families as well as more gay adoptions and full marriage equality.  “A big thing is I would love to see is more transgender support from everyone especially the gay community. I feel they face more discrimination then anyone and it makes me sad.”


And Shane would like to see less preaching of hate through religion, less divisiveness within the LGBT community, less violence towards our community and less outbreaks of STD’s/HIV.


As Pride nears, Shane ruminates further.  To him, Gay Pride means “family.”  “We are all family in this community, and fighting for the same things gives us a creative bond. Although we should already have these rights, I feel it creates a bond that heterosexual people will never know.”


He also feels that “Pride means finally living your life and being you. It means loving who you are and loving what you are.  What I have gone through has created me to be the person I am. As my mother says, ‘tell the truth or live a lie.’ Gay Pride is something that takes time sometimes, and I hope anyone reading this gets to feel that soon enough.”


Shane’s overall message for Pride: “We get one life. Be proud of yourself; don't focus on living it for someone else.”


Shane Messick can be reached at vocals_messick@yahoo.com for acting/modeling work or for anyone needing advice.
Posted by Steve Charing at 12:04 AM