The quiet dog days of summer that usually characterize Baltimore have been anything but.  With record-breaking heat to this point, politically the temperature will be rising to a fever pitch up to November and potentially beyond that.  With that in mind, this is an opportune time to reflect on recent events. 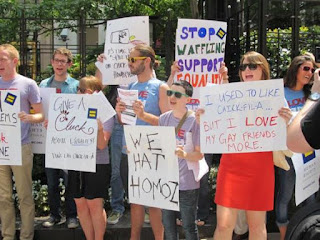 Chicken S**t: We start with a brief look at the flap over Chick-fil-A’s Dan Cathy’s comments that prompted a bitter reaction from the LGBT community and an ensuing backlash from, well, others.  Cathy said that the restaurant chain supported “the biblical definition of the family unit.”  He has the right to say that.  But his company donated roughly $5 million to what are considered “hate groups” and that fact stuck in the throat like an errant chicken bone.


The masses that lined up on “Chick-fil-A Appreciation Day,” orchestrated by homophobe Mike Huckabee, to consume artery-clogging garbage did so not as a protest against stifling free speech but it was a show of support for the anti-gay messaging emanating from Cathy’s mouth.  They played the victim card.  Had Cathy come out for marriage equality and was chastised by the likes of Limbaugh, would those same people line up to support his free speech?
This issue may have motivated our opponents but it got our side fired up as well.


The List: Over 13,000 names and addresses of folks who signed the petition to send the Civil Marriage Protection Act to a November referendum were made public.  There was a degree of shock, sadness and anger on the part of marriage equality advocates when people whom they assumed would be supportive appeared on the list.  Some noticed friends (as I did), co-workers, neighbors and even relatives who signed on to put marriage equality to a popular vote.
This is disheartening because people who we banked on for support went the other way, probably unaware that the names would be made public.  There were petition signers in neighborhoods with a strong LGBT presence on the list and many from normally progressive Howard and Montgomery counties.  Conversely, anti-gay Delegate Emmett Burns was not on the list, but you know how he will vote.

Howard County Register of Wills Byron Macfarlane—the first openly gay office holder in the county—was also stunned by the list.  “As any of us looks through this list I think we’ll receive a wake-up call to just how much work we have to do to win at the polls this November,” he told me.  “It really is disappointing to see so many people we know on this list. Personally, finding that aunts and uncles and my own father had signed was very upsetting. My hope is that over the next few months we're able to tell our stories and talk to them about love and commitment and win their votes.”


New Poll, Same Caution: A more optimistic development occurred when a new independent poll by Hart Research Associates that indicated supporters of marriage equality in Maryland lead the opposition by a 14-point margin—54 to 40 percent.
While this appears promising, there is a cautionary note: the margin of error is plus/minus 4.5 percent, a rather high number for a survey.  This means that the margin could be much tighter based on the sample.  Also, people tend to portray themselves in phone interviews as non-bigoted on social issues thereby artificially raising the support total.

“We're winning over undecideds and the intensity is clearly on our side,” said Marylanders for Marriage Equality Campaign Chair Josh Levin in a statement.


Levin was correct in acknowledging that “polls looked good in Maine, North Carolina, California, and almost every other state fighting to defend equality. But in the end, every time this issue went to ballot, marriage equality failed.” He promised in a fundraising pitch that the campaign will “redouble our efforts” and urged advocates to keep fighting.  We should act as if we are behind.  You know the opposition will.


Farewell Lisa: As you are probably aware, Lisa Polyak stepped down as Chair of the Equality Maryland Board of Directors.  “This was a planned transition,” Lisa told me. “Truthfully I am so happy and grateful for the new board members, and I am exhausted from the last few years, so this is a healthy transition for both me and the organization.”


Lisa had been a key leader of Equality Maryland, helping to guide the organization through some rough times with her steady hand and wisdom. She has always been tough, passionate and smart as well as accessible to the press and will be missed.


She and her partner Gita Deane, who have now been together for 30 years, were the lead plaintiffs in the marriage equality lawsuit (Deane and Polyak v Conaway) filed in 2004 by Equality Maryland and the ACLU of Maryland.  A lower court ruled for the plaintiffs but the ruling was stayed pending appeal. In 2007, the Maryland Court of Appeals by a margin of 4-3 ruled that the state’s ban on same-sex marriage did not violate the Maryland Constitution.


The couple married in D.C last year and lives in Baltimore raising their two daughters.


If Only: It was sad to read about the passing of Sally Ride, the first woman astronaut at NASA.  Her obituary mentioned she had a female partner of 27 years—a fact that had remained secret during her lifetime.  Ride had been an inspiration to women for decades.  Imagine what a role model she could have been to lesbians.


Coming out is a personal matter that should be respected.  We clamor for celebrities suspected of being gay or lesbian to come out and give encouragement to young gay, lesbian or questioning people but we never know the internalized battles that such an individual must wage before making that decision if one is reached.  But unquestionably, Ride’s disclosure would have had a major, positive impact on others.