On the Retirement of Vic Broccolino

Thank you for the well-deserved article on the retirement of Vic Broccolino from Howard County General Hospital (“Hospital’s ‘people person’ steps down,” January 9).  The article points out accurately that Vic has been and will always be a “people person.” 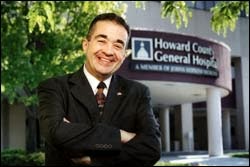 I had the privilege to be employed by the hospital on a part-time basis for a couple of years during the early 2000’s.  While I did not work directly for Vic, I had opportunities to work under him on projects and found him to be a smart, amiable and often humorous individual for whom I developed a great deal of respect.

I will never forget one of our early encounters when I appropriately addressed the CEO as Mr. Broccolino.  Instantly, he explained,  “Mr. Broccolino is my father’s name; you should call me Vic.”  I also had fun times watching and listening to Vic be the emcee for the annual volunteer awards dinner.  At the time there was no YouTube, but his performances would surely have landed there.

While he earned a solid reputation for being a jocular leader of an important institution, Vic had been a tough, no-nonsense executive constantly striving for excellence.  He sincerely believed and his policies reflected a demand  that the welfare of and service to the patients were the highest priorities.  In that capacity, he as well as the hospital’s administrative and medical staffs who followed his lead have served our community with distinction.


Vic never lost track of the fact that the people make a hospital run, and his respect for employees from the top surgeon to the hard-working maintenance worker was never lost on us as we proudly served under his leadership.


To Vic, I wish him a long and healthy retirement, and to his family a well-earned reunion with him.
hocoblogs@@@
Posted by Steve Charing at 11:01 PM