Mainstreaming or Not, the LGBT Press Remains Vital

A phenomenon has been occurring recently that would have been deemed inconceivable even a decade ago.  LGBT people are becoming “mainstreamed”—a goal for many but not for everyone. 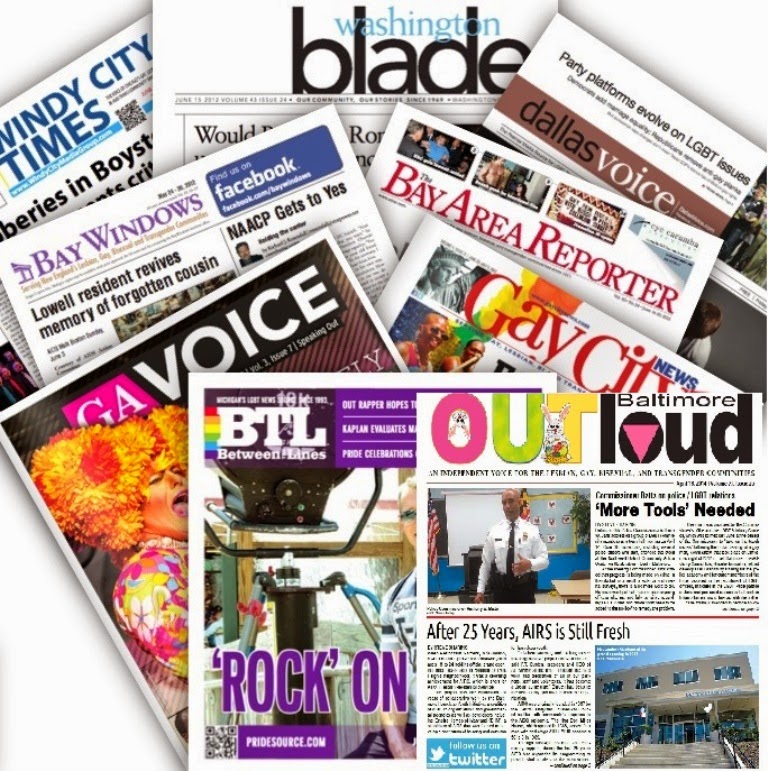 Clearly, mainstreaming is a by-product of the equality movement; we’re just like everyone else—for better or worse. Some people reject the mainstream and prefer a separate identity.  Yet, with polls showing growing acceptance on most LGBT issues at a jaw-dropping pace and with more folks coming out as fast as you can say “gay pride,” we are every bit a part of the culture.  Even straight people are now ho-hum when a gay athlete comes out.
This social transformation is evident as more LGBT individuals eschew gay bars and are flocking to straight establishments at an amazing clip. LGBT bookstores have gone out of business partly because of straight bookstores selling LGBT books.  (Oh yes, the Internet is a key factor as well.)  Gay people used to feel comfortable residing in an urban environment where there are enclaves of similar folks, but lately many have moved out to the suburbs to assimilate there.
Mainstreaming is obvious in the media as well.  No longer is it a water cooler conversation when a TV show has a gay character.  Ellen DeGeneres, who made headlines in 1997 when she came out, is embraced by virtually everybody. Neil Patrick Harris, who is also openly gay, is a coveted host of highly-rated award shows.  Few are shocked or even care when a celebrity opens the closet door.


Indications of this trend are apparent in the print media as well.  Our local Baltimore Sun, continuing its enthusiastic editorial support for LGBT causes in recent years, initiated an LGBT-oriented blog “GayMatters” a year ago, and it has done a creditable job in presenting LGBT news.  As such, it brings in a broader audience and helps the populace to better understand our issues.
Kudos to the Sun for giving us the attention that was lacking not that long ago when we couldn’t buy any coverage in print (or TV for that matter) except for the flamboyance and fetish-costumed participants at gay pride parades.  Of course, that’s changed now, but there is a red flag unfurling next to the rainbow one.
Regardless of the positives associated with mainstreaming, we must not overlook the need for our own LGBT press.  Some LGBT individuals and organizations, as an example, may be tempted to consider mainstream publications as the default outlet to share information.  That would be a mistake.


I’ve been covering Baltimore’s LGBT scene for well over three decades—longer than anyone here—and I’ve seen the value of our own press in informing our readers and how it has impacted our community by helping to improve our lives.  Despite the best efforts of the mainstream media, we are better equipped, even with fewer resources, to cover far more political and personal stories that are relevant to the LGBT community.  This specialization is similar to other publications that focus on a particular ethnic group or religion.
“The gay press is the only press entity that truly understands the LGBT people,” says activist Rev. Meredith Moise who has written commentary for both Baltimore OUTloud and Gay Life.  “The gay press humanizes us in a way no other press entity can.”


Our record over the years speaks volumes.  We covered the AIDS crisis in-depth before any mainstream media outlet would touch it and continue to offer health advice specifically for the LGBT population.  We chronicled the seminal court decisions affecting our standing in the country. We described the long and difficult road to end discrimination in Baltimore and in Maryland as well as in the military.
We analyzed elections and their impact on our community. At the same time, we identified those elected officials, individuals and groups who would stand in the way of progress.  We also acknowledge that the job is far from over with gay executions, bashings, bullying, discrimination, marginalization and other actions directed against the LGBT community still continuing globally and requiring coverage.
On the flip side, we have profiled those who are working for the betterment of all LGBT individuals when no mainstream publication would or could.  And we continue to give voice to many in our diverse community who lack such a platform.


“The LGBT media brings a unique perspective and insight to an LGBT-specific story that mainstream media simply cannot,” says Michael Lavers, a young but seasoned journalist for the Washington Blade, dubbed accurately as “the paper of record” for the LGBT community.  “For example, the first issue of the Blade was published in October 1969 – four months after the Stonewall riots. We have continuously reported on LGBT-specific stories that directly impact the community here in D.C. and beyond since then. The LGBT media shed light on these issues long before the mainstream media ever did.”
The LGBT press must reach out further than our own traditional readership to succeed.  “I believe that as a news vehicle for the LGBT community, we have a responsibility to inform not only our own community (diverse as it is), but also the population at large,” Daniel McEvily, editor of Gay Life, explains. “We have a platform to inform and enlighten those outside our community with our faces, our stories and our voices. If we do our job right, we can proactively change attitudes and hearts.”


For decades, the LGBT press has served us well by enlightening our community and allies in matters that not only interest us but continues to offer an unfiltered glimpse into how the world sees us and helps us to respond.   It has been a critical institution on the journey towards equality.  Lest we forget our historical contributions, it must remain so.
Posted by Steve Charing at 7:04 PM