Going on the Offense 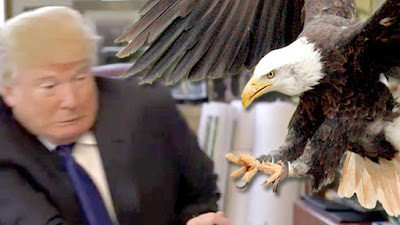 As the field of Democratic candidates for president in 2020 swells, each hopeful is desperately searching for a lane that will distinguish himself or herself from the rest of the pack. Some choose specific issues, such as climate change, Wall Street, health care, jobs, gun restrictions and others.

But in the end, the winner of the primaries and who will ultimately take on Donald Trump will be the one who can convince voters that that person can engage Trump on his own turf and beat him.

Of course, many believe that our political discourse is already uncivil mainly because of the historic elections of Barack Obama in which birthers and racists like Trump tried to de-legitimize.  That was followed by the 2016 election and subsequent vile tweets and other offerings from Trump himself that have clearly degraded the office of the presidency.

In normal times we would want to push for civility and dignity in the White House and on the surface that would make a strong campaign issue.  But these are not normal times.  Democrats are facing an uphill battle as it is with Trump constantly on the offensive, an economy that at this point hasn’t tanked yet, Trump’s immovable and loyal supporters who are motivated to vote, a sycophantic GOP-controlled Senate,  and a likely intervention by Russia to ensure that Putin’s puppet remains in power.

Two years ago, I wrote a piece titled, “Where’s the Flamethrower,”  a call to action for any prominent Democrat to take it to Trump. Prior to the Midterms I wrote this piece, "Democrats Must Play the Trump Card" with a similar message.  There are so many areas in which Trump could be attacked, so much vulnerability. The Democratic electorate craves that person, and so do I.

The 2018 midterms whereby the Democrats rode a blue wave to take back the House of Representatives did so largely based on their anti-Trump fervor. Sure, health care was listed as the number one issue and rightly so, but the motivation, the energy and the drive was powered by the voters disdain for Trump and Trumpism.

Democrats in the race need to exploit Trump’s many weaknesses.  That will get under his skin and he is sure to make a huge unforced error during this volatile election cycle.

Former Vice President Joe Biden, replete with a ton of baggage from his four decades-long career, remained at the top of the polls and leads by a seemingly insurmountable margin.  Yes, the nostalgia for the Obama presidency and name recognition has a lot to do with it.  But the surge occurred after his rollout in which Biden went right after Trump from the get-go by reminding voters of Trump’s callousness regarding the 2017 racist and anti-Semitic march and demonstrations in Charlottesville, which led to the murder of Heather Heyer.

Biden was wise to roll out his campaign that way.  The Charlottesville episode was a nadir in the Trump presidency. Biden came out of the gate and pushed the Charlottesville tragedy right into Trump’s face.  Trump’s weak, yes I said weak, response was that many were heralding the exploits of General Robert E. Lee.  Keep in mind that Lee, a slave owner, was a traitor to the U.S. by leading a civil war against our nation.

There are a number of such Trump vulnerabilities to exploit, and given there is so much time left until the voting begins in the primaries including the pivotal debates, it would be wise for the other candidates in the field to execute that strategy and fire up their supporters.

Below are just two examples of where Trump is ultra-sensitive.

Trump’s lack of intellect. Trump threw Mayor Pete Buttigieg a 3-0 fastball down the middle of the plate when at a rally he said the mayor resembles Alfred E. Neuman, the mascot for MAD magazine.  Instead of hitting that cookie over the fence, Buttigieg checked his swing and fouled it off when he replied that he’d have to Google it to check the reference and that it was a generational thing. A better response was called for.

But later on The Tonight Show with Jimmy Fallon, Buttigieg took a better swing and made solid contact.  “You know, we talk about elevating the dialogue, so the fact that I inspired him to make a literary reference possibly for the first time…” he said to great laughter.

Personally, I would have said, “I didn’t realize the president’s reading comprehension level has risen to the level of MAD magazine.”

Cowardice.  Trump boasts and brags how tough he is, how he is the best person in the room, the smartest in the room, the bravest in the room. Not so fast, conman.  The reality indicates that he is a blustery coward, and Dems should irk him to no end by dubbing him “The Avoider-in-Chief.” Consider:

The Dems need to go after Trump as he will certainly do to them. He already welcomed each new candidate to the race with insults. Sure, “Little Marco” Rubio’s return volley fell flat and lost his home state by 20 points in the primary.  But Trump wasn’t president then; Rubio never expected him to even be the nominee.

Democrats have a whole lot of fodder to choose from, and they must attack Trump relentlessly. Not only is this necessary because the charges are true but it will hopefully gin up enthusiasm and unify a fractious Democratic Party in time for the election.

Disregard what the pundits and polls say.  This election is not about issues as much as it is all about Trump. If you think that Trump has been bad and scary for our nation the past 2-plus years, imagine how an unbridled Trump would be in another term with no accountability to the American people.

Posted by Steve Charing at 5:54 PM