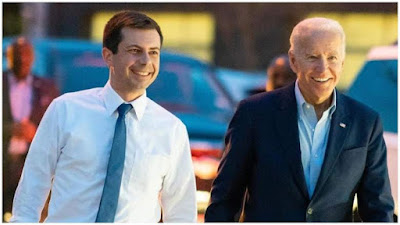 Joe Biden broke new ground when he selected Senator Kamala Harris as his running mate for vice president. Now that she and Biden have been elected, Ms. Harris will be the first female vice president in our country’s history and the first of African American and South Asian descent.

Now the president-elect has broken additional ground in naming former South Bend, Indiana Mayor Pete Buttigieg to serve on his cabinet as Secretary of Transportation as reported by numerous major news outlets. If confirmed by the Senate, Buttigieg would be the first open LGBTQ person to receive Senate confirmation for a cabinet position.

Buttigieg burst on the national scene in April 2019 when the mayor announced his long shot candidacy for President. He was such a refreshing contrast to President Trump that I opined the day after the announcement that he would make a viable run and possibly even succeed.

A bodacious fundraiser, Mayor Pete as he was affectionately called, impressed many voters with his intelligence, political talent, military record and life story, but his lack of experience other than leading a smallish city gave voters pause.  His record as South Bend mayor, particularly when a Black man was shot by a white police officer, created friction with many in the African American community. As a result, failed to garner support from this critical voting bloc.

Nonetheless, Pete’s narrow win in the Iowa caucuses enabled him to claim that he was the first openly gay candidate from a major political party to receive delegates from a primary contest. Any momentum that should have accrued to him was stifled by the technical glitches surrounding the tallying of votes in Iowa. Regardless, he finished second in New Hampshire but his campaign fizzled as he entered states with a larger minority population than Iowa and New Hampshire.

Immediately following the South Carolina primary, Buttigieg suspended his campaign and joined other rivals in endorsing Joe Biden. For his part, the president-elect views Buttigieg very positively. Biden had compared the former mayor to his son, Beau, saying it’s “the highest compliment I can give any man or woman.”

Buttigieg campaigned for Biden, raised money, represented the ticket on FOX News, and served on his transition team. His selection to a prominent position in a Biden Administration was expected by many Washington insiders and beyond.

According to Politico, “If confirmed, Buttigieg will head to Washington to take responsibility for nearly 55,000 employees, an $87 billion budget and more than a dozen agencies, overseeing the nation’s airspace, highway system, pipeline safety and much more.

On the campaign trail, Buttigieg introduced out a $1 trillion infrastructure plan that prioritized upgrading the country’s crumbling infrastructure and expanding broadband internet access through payment to state and local governments.

If confirmed, Buttigieg will be in a position to gain experience at the federal level and boost his qualifications for a future run for president.

But his appointment will be an inspiring message to members of the LGBTQ community. The Human Rights Campaign, an LGBTQ advocacy organization, said the nomination would be “a reminder to LGBTQ people everywhere that any opportunity is possible.”

This is a moment of tremendous opportunity—to create jobs, meet the climate challenge, and enhance equity for all.

I'm honored that the President-elect has asked me to serve our nation as Secretary of Transportation. 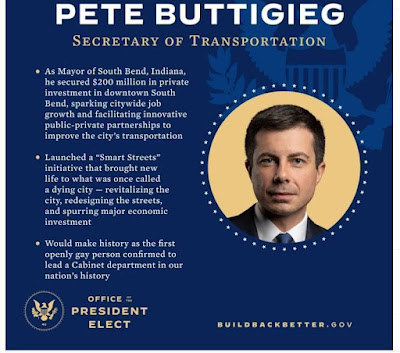 Posted by Steve Charing at 5:35 PM