Why Pete's Nomination Should Sail Through 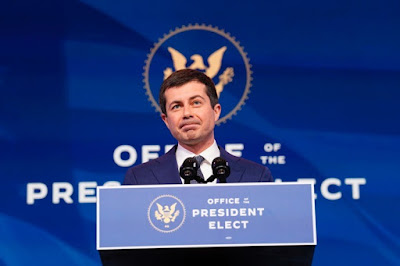 On December 16, 2020, history was made as the first open LGBTQ person was nominated for a cabinet position. President-elect Joe Biden announced that Pete Buttigieg, the former mayor of South Bend, IN, has been selected to be the Secretary of Transportation in the new Biden-Harris administration.
Mr. Buttigieg's remarks following the announcement are shown here.


The Senate would have to confirm this nomination for this historic breakthrough to be official. And they will.

Yes, Mitch McConnell is a serial obstructionist and a spiteful one at that. And he could cause mischief with Biden’s cabinet nominees assuming his party retains control of the Senate and that is certainly an open question. And yes, Republican senators still under the thumb of sore loser Trump may resist anything Joe Biden tries to put forward. But in Mayor Pete‘s case, they will confirm.

For one thing, the Department of Transportation, important as it will be in a potential infrastructure deal as well as energy and climate considerations, is not part of the top tier cabinet positions. Those include State, Defense, Treasury and Justice. Therefore, the nomination should not be one in which Republicans will find ideological differences to contest.

Secondly, Mr. Buttigieg is a centrist and not a “left wing radical,” the type that Republicans loath. During his campaign he promised to work across the aisle so that will bode well for him during the Senate confirmation process.

Mr. Buttigieg’s personal story is compelling. A Rhodes Scholar, a military veteran, an ability to speak some seven languages fluently, and the first gay presidential candidate from a major political party to win delegates during a primary are qualities that endeared him to many in the public and media after he burst onto the scene two years ago. 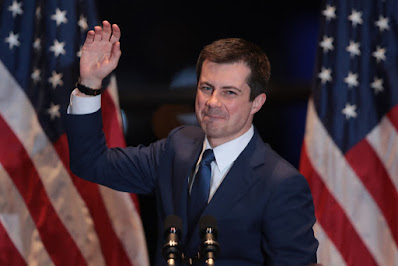 The historic nature of this selection will not be lost on the Senate. When McConnell grudgingly acknowledged Biden’s victory the day before, he proudly announced that Kamala Harris will be the first female vice president. If nothing else, the Senate reveres history.

If they block the nomination, the media and the public writ large will assume it was due to homophobia and not on the merits. That is a possibility for sure given that the Senate contains a fair number of bigots.

But it would be politically damaging to the Republicans if that perception gains traction. It’s not a good way to expand their “tent” if suburban women see this rejection for what it is. If this election proved anything, you cannot win a national race with just the base.

Moreover, there are a number of gay Republicans who are big donors. The GOP should keep that in mind.

The only reason I can fathom in which the Senate would reject this nomination is that they don’t want to bolster Mr. Buttigieg’s resume. He is an enormous political talent as evidenced by his brief remarks following Mr. Biden's introduction, and at age 38, a future presidential run is likely. The experience he will garner at the federal/cabinet level will put the kabash on his lack of resume. He will pose an enormous threat to Republicans in a potential presidential bid should he capture the Democratic nomination.

Nonetheless, the Senate Republicans will be eyeing the near term and should have no ostensible reason to reject this nomination with more significant battles looming. Mayor Pete should sail through without a hitch, and we will be calling him Secretary Pete in a few months. 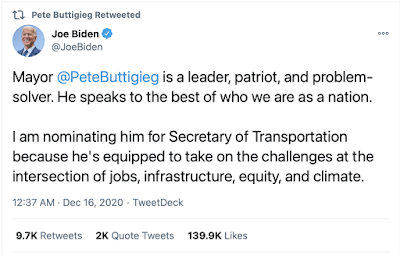 Posted by Steve Charing at 1:04 PM