The Devil Went Down to Georgia

The devil went down to Georgia. He was lookin’ for a soul to steal. He was in a bind ‘cause he was way behind. And he was willin’ to make a deal. –Charlie Daniels Band, 1979 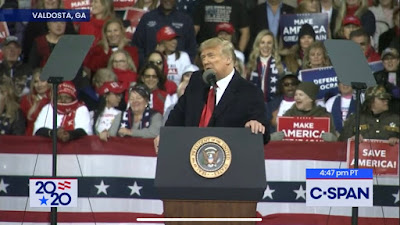 On December 5, the most delusional, most undemocratic, most paranoid, most narcissistic, most incompetent and most corrupt president in my lifetime (and I go back to Van Buren) descended upon Valdosta, Georgia like a giant stink bomb. Donald Trump, the biggest sore loser in centuries, held his first post-election rally that was also yet another super-spreader event even while Covid cases continue to set daily records in hospitalizations and deaths. I suspect some of those attending the basically mask-less, ego-stroking rally will be leaving us in the not-too-distant future.

Ostensibly, Trump was there to motivate his troops to support the two Republican senatorial candidates in a crucial runoff election on January 5, David Perdue and Kelly Loeffler. But as predicted Trump echoed the same lies, the same misinformation and the same unsubstantiated garbage that somehow the election was stolen from him; it was rigged; and that only widespread fraud kept him from enjoying and enriching himself and his family in a second term.

“They cheated and rigged our presidential election but we’ll still win it. And they are going to try to rig this election too,” Trump told the cheering crowd.

During the month following the election in which he lost by around 7 million votes and by 74 in the electoral college, Trump attacked our democracy and the election process with his inflammatory and untrue rhetoric that included zeroing in on Georgia as the runoff to decide which party will control the Senate looms.

That surely isn’t helping to gin up support and turnout for the two flawed Republican incumbents. Former members of Trump’s hapless legal team, which is challenging the results in several swing states armed with no evidence of wrongdoing, urged Trump believers not to vote in the runoff because the system was rigged and rife with fraud, (Translation: Attempts at voter suppression failed; Black voters are voting.)

The GOP infighting, normally more common among the Dems, is the catalyst the Democratic candidates—Rev. Raphael Warnock and Jon Ossoff—will need to overcome the intrinsic electoral disadvantages in Georgia. Who would ever suspect that as recently as a month ago, Georgia Governor and Trump toady Brian Kemp, Trump’s supplicant Attorney General William Barr and Trump state TV’s FOX News, would be in the crosshairs of Trump and his cult-of-personality followers?

Though some in his flock have drifted—a whopping 27 Republicans in Congress out of the 249 seated actually acknowledged Joe Biden’s decisive victory—Trump has terrified Republican officeholders into toeing the mantra that the election was fraudulent or that Trump has the right to pursue all legal means to overturn the results in what has amounted to be the theatre of the absurd. He even demanded to know who those 27 are.

Nobody can get into Trump’s disturbed brain. But either he truly believes that he won the race for not the widespread fraud, which miraculously affected his totals but not the down ballot contests where Republicans did better, or that this is another con from the best conman this planet has ever known.

Since the election, Trump has raised hundreds of millions of dollars from his supporters to help pay for his election-related legal challenges. Except the fine print indicates that most of the money raised can be spent on other matters. I see Trump using this largess to pay off sizable loans that are coming due. But don’t tell that to the gullible Trump supporter.

As for Georgia, I am not convinced that despite Biden’s 12,000 vote margin of victory following multiple recounts, the Peach State has turned blue. Many Republicans decided that Trump was too much but returned to the fold down ballot. Ossoff, for example, amassed far fewer voters than Biden did. Republicans control all the levers of power in Georgia, and outside the Atlanta and Savannah metropolitan areas, by and large, it is a conservative state.

For the Democrats to sweep this critical doubleheader (and they must sweep for Dems to relegate Moscow Mitch McConnell to minority status), the two candidates will need another massive turnout both through absentee and in-person voting. The efforts by Stacey Abrams to register new, young and minority voters spearheaded Biden’s triumph there. Similar work will be essential.

Moreover, Trump’s continued assault on our democracy, his un-American refusal to accept defeat and move on to a smooth and peaceful transition of power, and his attacks via countless rage tweets against Republican officials including the dangerous violence-stoking rhetoric in Georgia may diminish turnout sufficiently for the Dems to squeeze by.

The devil went down to Georgia looking for a soul to steal, and for Democrats, that might prove to be the best holiday gift of all. 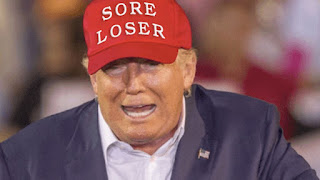 Posted by Steve Charing at 5:28 PM

Bye Bye Asswipe! Guess what no one's going to miss you! Good Riddance! Go to Russia where your best friend is!