The False Equivalence of 'Whataboutism' 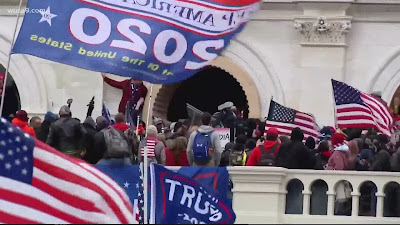 On January 12, 2021, President Donald Trump was impeached for the second time in a year. On this occasion it was for inciting an insurrection. By becoming the only president to have been impeached twice, Trump has cemented his place in history as the worst president ever. Regardless of the outcome in the Senate, this action makes it official.

The capturing of 10 Republican votes in the House vote on the single article of impeachment renders it the most bi-partisan impeachment ever. But to listen to the other Republicans oppose the action, they were unable or unwilling to defend the president on the merits but offered an absurd dose of “whataboutism.”

Some Republicans used the Black Lives Matter marches and disturbances from this past summer as an equivalent of the violence Trump incited. Several days earlier Marco Rubio noted, “The events that we saw this week should sicken every single one of us ... Riots should be rejected by everyone, every single time,” he said. “Now, are the left hypocrites? Absolutely. I remember what they now are calling ‘insurrection,’ they were justifying just this summer.”

Let’s look at some of the differences.

The BLM marches crossed racial lines and were a reaction to the murder of George Floyd by a Minneapolis police officer Derek Chauvin. He held his knee on the throat of the unarmed Floyd for 8 minutes and 46 seconds as the victim begged him to stop. At the time this was the most graphic incident of a police officer killing an unarmed Black person as footage later released provided the horrors of the act.

Similar incidents have occurred for decades around the country. The means to carry out the deaths may be different but not the results.

In cities all over the U.S. and countries around the world, people demonstrated peacefully by marching to demand police reform and justice. Yes, some criminal elements broke ranks and burned and looted property. But contrary to the assertions made by congressional Republicans during the impeachment debate, Democrats did condemn the violence associated with these marches, especially Joe Biden who did so emphatically on multiple occasions. 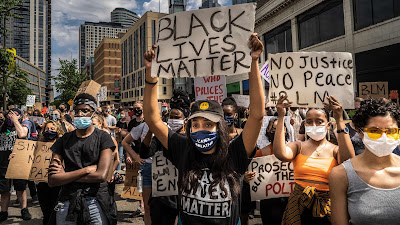 Unlike the domestic terrorists spurred on by Donald Trump, the protesters during the BLM marches did not attempt to illegally breach and destroy the Capitol building in Washington. They did not target lawmakers or any individuals during the demonstrations. They did not come armed to the teeth to include pipe bombs, guns of all types, poles, bats, pipes, hockey sticks, knives, zip ties and other weaponry.  They did not dress in military-style uniforms and head gear looking for combat. And if they had, I doubt the BLM would have been treated by police with the same deference as Trump’s mob.

Unlike the mostly white, anti-Semitic and racist insurrectionists, the BLM protesters did not try to overthrow the government by attempting to prevent the orderly and peaceful certification of -the Electoral College results. Unlike Trump’s frothing-at-the-mouth rabid followers, the BLM protesters did not go headhunting for Vice President Pence and Speaker Pelosi. They did not chant “Hang Mike Pence” and erect a gallows in front of the Capitol to finish the job.

Moreover, the BLM protesters did not bludgeon a policeman to death as was done by those who push the Blue Lives Matter mantra.

The biggest difference of all is that the BLM protesters were reacting to systemic racism present in our cities’ police forces while the Trump insurrectionists were acting on the big lie that the election was stolen. So remorseful was Trump that he was enjoying all the action at the Capitol with a smirk and satisfied that people were fighting for him.

Republicans are desperate not to leave the good graces of Trump and his cult-like followers to even try to compare these two events. Someone tell me how a seditious coup attempt that resulted in five deaths and much destruction to the citadel of democracy is equivalent to stealing a box of Pampers from a store.

Posted by Steve Charing at 9:17 PM