The case for Trump's conviction must be directed more for the public than the Senate. 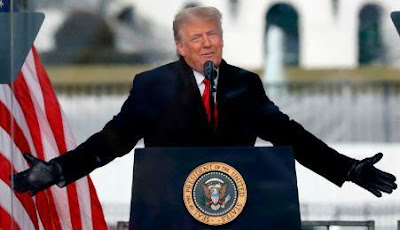 Donald Trump spewed the biggest of all his many lies when he claimed he actually won the November 3 election by a landslide no less had not the Democrats stole it from him through fraudulent means. Trump’s loyal base of support that includes notably white supremacists, violent militia groups, QAnon conspiracy nuts and other far right extremists bought into that lie.

So when Trump tweeted that there will be a “wild” rally on January 6 to protest the “steal” and pressuring Vice President Mike Pence to violate the Constitution by overturning the election results that day, thousands of enraged, amped-up supporters—many of them armed—gathered at the Ellipse near the White House.

They listened to the likes of Donald Trump, Jr., Senator Ted Cruz and Rudy Giuliani who decried the stolen election and urged the angry mob to take action. Then they heard from President Trump himself.

“We’re going to walk down. Anyone you want, but I think right here, we’re going to walk down to the Capitol…Because you’ll never take back our country with weakness. You have to show strength and you have to be strong,” Trump said in the midst of a rambling speech dominated by lies about individual states’ voting results and other false grievances. The crowd had been whipped up to a state of frenzy and was frothing with a desire to take action.

As just about everyone in the world witnessed on that horrific January 6, the rabid mob attacked, desecrated and looted the Capitol. Five people lost their lives including a police officer who was bludgeoned to death. Members of Congress and Senate who were going through the process of putting their stamp of approval of the Electoral College results had to be escorted out of their respective chambers into a safe haven as their lives were in jeopardy. And for good measure, some of the mob were out to kill Mike Pence with a makeshift gallows erected outside.

From even before the election through January 6, Trump laid the foundation for the insurrection on our government by violent domestic terrorists with his false and ridiculous claim that the election was rigged against him. During the siege of the Capitol, Trump, his family as well as others watched the proceedings on TV (his major activity during any day of his presidency when he’s not out golfing) and yucked it up celebrating Trump banners replacing American flags and the numerous violent acts taking place during the riot. He also did nothing to stop it.

But here’s the sad upshot of this event: Trump will avoid conviction at his impeachment trial next week for inciting an insurrection because the overwhelming majority of Republican senators remain terrified of Trump and his supporters and the votes they represent.

The able Democratic House managers who will lead the impeachment trial against Trump will lay out all the evidence in great detail—Trump’s lies about the election results, his attempts to pressure state election officials to “find votes,” the footage from Trump’s inciting speech, the acts of violence perpetrated by the mob, and the on-camera comments from the rioters claiming Trump put them up to it. This damning evidence should not be directed towards the senators who will be serving as jurors, witnesses and victims. They have already made up their minds. 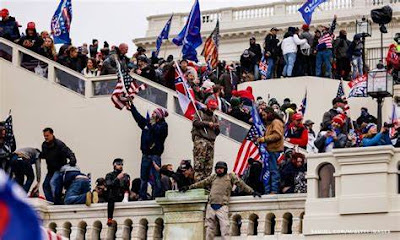 The case, in excruciating and dramatic detail, must be brought to the American citizens who witnessed in horror an attack on our Capitol—the people’s house—not seen since the War of 1812.

While Republicans argue dubiously that the trial itself is unconstitutional because Trump is no longer president, they are merely seeking an off ramp so they don’t have to judge him on the merits of the case. They want to “move on” unlike the way these folks moved past Benghazi.

Every Republican congressman who objected to the election results even after the riot and every senator who votes to acquit Trump should be branded as supporting sedition. The images from this manifestation of domestic terrorism, already seared into the souls of most Americans, must be included in every campaign ad against these Republicans up for election in 2022. The Republican Sedition Party, I call it.

It’s been said that Democrats tend to bring a ladle to a gunfight. The events of January 6 should be a millstone around the necks of those seditionists. If they do not punish those Republicans who put the party of Trump before our country then it would be clear political malpractice.

Posted by Steve Charing at 5:06 PM