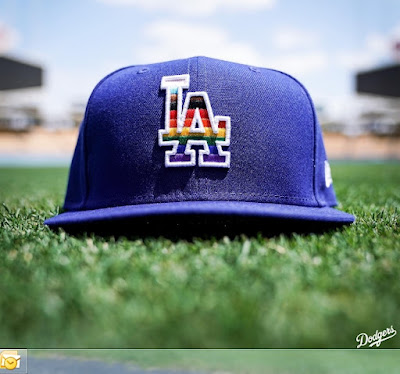 It’s just a ball cap. But oh, how some people get triggered!

The Los Angeles Dodgers announced that for the first time, the players will all be wearing a Pride cap featuring rainbow colors on the interlocking LA logo during the team’s LGBTQ+ Night on June 3 at Dodger Stadium when they face off against the New York Mets. Moreover, the following week at Oracle Park in San Francisco, both the Dodgers and the Giants will for the first time wear their respective Pride caps during the game.

“The Los Angeles Dodgers are proud to stand with and recognize the LGBTQ+ community in Los Angeles and globally,” said Stan Kasten, President & CEO, Los Angeles Dodgers in a statement. “The Dodgers have a history of breaking barriers and we’re proud to be a part of another chapter in MLB history as the Dodgers and Giants each wear their team’s pride caps on June 11. While our organizations have a long-storied rivalry on the field, we stand together when it comes to equality for all.”

Adds Gabe Kapler, the manager of the Giants, “It is an honor to be a part of this moment. I hope everyone watching the game on June 11 sees the clear statement being made — we stand for equality and respect of all people, regardless of sexual orientation. Wearing the Pride logo is both a reminder of the discrimination the LGBTQ+ community faces and the importance of supporting and creating a more inclusive environment.”

Most major league baseball clubs have held similar Pride celebrations at their ballparks but never had players taking the field wearing such attire. According to Outsports.com, a site that focuses on LGBTQ+ athletes in sports, only the Texas Rangers and Houston Astros did not host a Pride event during the pre-Covid 2019 season.

Not everyone shared in the celebration of the new ball cap to be worn by the Dodger players.  When the Dodgers unveiled the cap on Instagram, there was quite a number of negative comments sprinkled among the many who voiced support. Some were benign as in juliannavaaa’s post, “Why can’t we just play baseball?” Others were more sinister (reported to Instagram as hate speech) like “We should have taken them [gays] out years ago.”

Then you have the typically juvenile homophobic snark by commenter richnowlandrn “Brings a whole new meaning to ‘Switch Hitter.’” Or the genius of aliyahsdead, “need the dodgers and the giants to make out to truly express their support for pride”.

But responding to one of the haters, sdotarick wrote, “You can tell who woulda booed Jackie back in the day too.” On that same theme, baserobber posted, “All the people hating now would have been the same people hating on Jackie Robinson. Be open to new ideas and other people being different.”

It is encouraging that nearly 88,000 liked the announcement on Instagram and the unveiling of the Dodger’s new Pride cap with many speaking up to defend it and calling out the homophobes.

Homophobic comments frequently appear on fan pages and message boards all over. One jerk on the Baltimore Orioles Facebook group lamented the Orioles Pride Night last year and inquired why there wasn’t a Christian pride event. I guess he was bothered by so many Christians being physically attacked or fired from their jobs or bullied at school or kicked out of their homes by family members for being Christian. Or maybe he believes the manufactured war on Christmas is real.

Whatever the reason, there are too many folks who resent that the LGBTQ+ community being celebrated. Surveys have been positive in recent years regarding LGBTQ+ acceptance. In the macho world of sports, however, we haven’t made enough progress though leagues and teams have become very supportive. Still, there is no open LGBTQ+ athlete currently playing in any of the four major male sports leagues.

There are going to be ignorant buffoons and haters no matter what, especially those who are shielded by the relative anonymity of the internet. The stereotyping and homophobia are palpable on these platforms.

And this is exactly why the LGBTQ+ community needs Pride.  A tip of the cap to the Dodgers, Giants and all the MLB teams who celebrate diversity and equality and do so in a public way.

Posted by Steve Charing at 9:40 PM