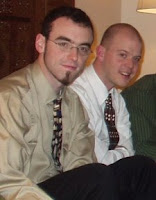 Baltimore man struggles to keep late partner’s gravesite
By Steve Charing
For Kevin-Douglas Olive of Baltimore’s Seton Hill, the battle only began once his partner Russell Groff (l.) died from staph infection in November 2004 at the age of 26. Groff was buried in a rural Tennessee cemetery that the partners had agreed on in a will and burial agreements. Both were from Tennessee.
But Groff’s parents, Lowell and Carolyn Groff, had challenged the burial site and the right of Olive to be executor since July 2005. The expensive legal battles that have ensued and are continuing to strap the finances of Olive to the point he must sell his car and try to raise funds to ward off the Groffs’ challenges.
Russell Groff’s parents have been virulently anti-gay, which is ostensibly motivating them in their pursuit to deny their son’s expressed wishes. They even did a Fred Phelps-like protest during Knoxville, TN’s LGBT "Come Out Knoxville" celebration.
According to the Knoxville Metro Pulse, Carolyn Groff blames the "destructive gay lifestyle" for the death of her son, an aspiring playwright. "He wasn’t like that until he got involved in the theater group at Maryville College," she explains. Several other members of her Bible Baptist Church brought signs denoting that gays are destined to hell. Their brand of Christianity drove Russell away from the Christian church and joined Kevin as a Quaker after they met.
Conversely, Kevin-Douglas Olive parents were active in the Greater Knoxville PFLAG chapter where his mother served as treasurer. Kevin, too, was active in the chapter. But his family does not have the financial means to help Kevin in his series of lawsuits.
Although he is facing financial ruin, Kevin, 35, a French teacher, is determined to win for Russell what he had wanted. "He was the most important person in the world to me," he told Baltimore OUTloud. "I owe it to him that his wishes are carried out."
The legal battles, which are sapping his funds, are a two-pronged approach: one to impeach Kevin as an administrator of the estate and the other to overturn the will. He had won the initial round in a Baltimore City Orphans Court but Groff’s parents have appealed the decision so that they may move their son’s body to a family cemetery. During the appeal, the entire case must be presented from scratch.
Kevin says the legal fees are currently running $22,000. Thus far, he has raised only $5,000 to meet those obligations. He can use whatever financial help is available.
Contributions can be made to:
Kevin Olive Defense Fund
c/o Homewood Friends Meeting
3107 N. Charles St.
Baltimore, MD 21218
Posted by Steve Charing at 12:53 PM

Here is an update to the case from the Washington Blade:

A gay Baltimore man has won a legal battle to keep his late partner’s remains buried in the Tennessee grave the two men chose.

Kevin-Douglas Olive reached a settlement Aug. 10 with the parents of his late partner, Russell Groff, who sought to move the body to a family plot. The settlement ended a legal battle that lasted two years.

“It’s been pretty traumatic,” Olive said. “I’m just ready to put it all behind me and see what comes next.”

The settlement, which ends all attempts by Lowell and Carolyn Groff to overturn their son’s will, stipulates that a large gravestone intended to also accommodated Olive be replaced by separate headstones at each grave.

Olive said he’d hoped to avoid replacing the gravestone, but was willing to make that concession to end the case.

“If they will leave me alone and let this case go,” he said, “I will get that headstone changed.”

Lowell and Carolyn Groff, who had sought to move Russell’s body to a family cemetery, argued in court that their 26-year-old son didn’t know what he was doing when he completed his will and burial instructions shortly before his death on Nov. 23, 2004.

Russell, who was HIV-positive, died from a staph infection that spread throughout his body.

Olive, 35, said Russell was estranged from his parents at the time of his death and completed a will and burial instructions in anticipation of the legal battle.

In a brief interview this week, Carolyn Groff told the Blade that she and Lowell “continue to love” Russell, and that Olive “is using everything that he can, everyone that he can, to further the homosexual agenda.”

Carolyn, who lives in Seymour, Tenn., declined to discuss the settlement “because of future ramifications,” but did not elaborate.

In accordance with the settlement, Mark Scurti, a gay Baltimore attorney who represented Olive, said his client also must give to Lowell and Carolyn about two dozen of Russell’s personal items.

“Things such as a karate black belt and a fishing tackle-box that his father had given him,” Scurti said. “More sentimental items than materialistic.”

He said the settlement does not stop Olive from being buried alongside Russell, and makes clear that Russell will remain buried outside Knoxville, Tenn.

“That was a non-negotiable issue for us,” Scurti said. “We made sure that the only thing that’s going to change is the tombstone.”

Although the settlement yielded what Scurti called “a good result” for Olive, he noted the case held a lesson for gay Marylanders.

“Make sure that your affairs are in order early,” he said. “Don’t wait until your partner is ill or something catastrophic happens.”

Olive agreed. He said that he and Russell erred by waiting until Russell was in the hospital to formalize their legal protections.

“There are so many gay couples running around with no legal documents written up whatsoever,” Olive said. “It’s stupid. Just stupid. It was stupid on our part.”

He said gay Marylanders — unable to acquire the legal protections that marriage or civil unions would afford — must guard themselves through other means.

Scurti said legal costs for the case, charged at about one-third his usual rate, were more than $5,000. He noted those costs would have doubled had the case gone to trial.

Olive, who sold his car to help fund the case, received assistance and donations from people across the nation and as far away as Belgium.

Olive said after the case’s bills and loans have been paid, all remaining funds will be given to an undetermined gay civil rights organization.

He noted that Equality Maryland, which is seeking marriage equality in the state for same-sex couples, might be the recipient. Olive said he strongly supports that effort.

I think Kevin should give the body back to the parents. Kevin will go on with his life but Russell's parents will NEVER "move on." There is nothing worse than the death of a child....no greater pain!! You can never replace a child, but you can replace a lover. If Kevin had a heart, he would do the right thing and give the body back to the parents with love.....that is the "loving" thing to do. Many people do not understand the homosexual life, that does not mean they didn't love their son with all their heart. I think ALL homosexuals should quit trying to portray themselves as "victims" and go on with their lives.

Good for you Kevin. I believe you have done right by Russell's wishes. Thank you for helping to lead the way.

your friend,
D
Hagerstown, IN