The Dems Need to Unify and Soon 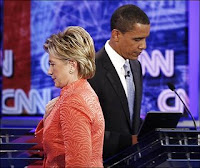 A split party could allow McCain to sneak in.
By Steve Charing

Pity Republican presidential nominee John McCain! The country is just finishing off eight years of a GOP-controlled White House, which has produced the most unpopular president in modern times. And to add insult to injury, poor John McCain recently received George W. Bush’s endorsement and a threat by Bush to campaign with him. Ouch!
The Bush-Cheney Administration, to which McCain will be inexorably linked during the national election, has been beset by scandal, greed, secrecy, torture, unaccountability, threats to the Constitution, incompetence, record debt, and has squandered trillions of dollars and thousands of lives over a war that had no legitimate basis. With all that baggage, McCain must defend his unflinching support of this broadly despised war. In fact, he sees us in Iraq for up to 100 years.
The nation’s economy is moving towards recession. Joblessness and inflation are on the rise. So are foreclosures in the housing sector. The stock market and consumer confidence are in a free-fall. And gas prices are soaring on a limitless trajectory. Historically, the party that controls the White House is blamed for economic downturns, Sen. McCain.
McCain, himself, is clueless about the economy and just like his fellow GOPers, he offers tax cuts as the panacea. He’s a one-trick pony that mentions "Islamist extremism" and "al-Qaeda" in every speech, no matter the subject.
Add to the mix that the Democrats are energized and oh so eager to replace President Bush with one from their own party. Democratic turnout in the primaries, even in so-called red states, doubled the Republican forces. The Dems have registered far more new voters that would ostensibly lead to a lopsided victory come November. And a large chunk of the GOP does not trust McCain and lacks enthusiasm for his candidacy because of his stands on immigration, campaign finance and taxes.
Moreover, the white-haired, pasty skinned septuagenarian will also face the daunting challenge to convince the voters he didn’t just rise from a crypt, which, in fact, he did politically. With the deck stacked against him like this, why is McCain even bothering to run?
Because he can win!
Since he has been officially designated as the Republican’s standard bearer, McCain can go about planning for a national election as Senators Clinton and Obama continue to duke it out. McCain can make nice with the social conservative bigots in the party, select a vice-president that is "acceptable" to the GOP’s crucial factions, and mobilize the "opposition research" folks for the inevitable "fear and smear" campaign that characterizes Republican election cycles.
Meanwhile, Obama and Clinton appear to be on course for a stalemate with the Denver convention in late August looming as the Waterloo in a hard-fought contest. Neither appears willing to surrender although Obama is leading in pledged delegates and is likely to hold that advantage through the remaining primaries. Yet neither candidate will muster the sufficient number of delegates that puts him or her over the top.
Speculation abounds concerning the contentious disposition of the "super" delegates, the handling of the invalid contests in Michigan and Florida, and how the party’s bigwigs will ultimately resolve the impasse prior to the Rocky Mountain extravaganza.
While this process unfolds, expect Clinton and Obama to battle each other. Clinton saw first hand in Texas and Ohio that going negative is beneficial. Obama, on the other hand, had eschewed the negative approach up to the point of those contests. Pressure is mounting for him to throw some punches lest he will be perceived as too soft and unready to take on McCain and Company.
Although this pugilism may liven up the spring and summer with tasty commercials and sound bites, the exchanges will provide fodder for an already desperate Republican Party willing and able to use the ammunition against the eventual Democratic nominee. The deleterious blows that each Democratic candidate inflicts upon each other, and the money expended during these battles damages them and opens up McCain’s narrow door for an improbable victory.
If you are a member of the LGBTcommunity or an ally, that is not a good thing. McCain, if he should prevail, will likely serve one term. That means his right-wing vice president is set up for a potential eight additional years on top of Bush’s eight and McCain’s four.
McCain opposes the Federal Marriage Amendment, not because he’s a proponent of marriage equality, but because he considers such a step as a misuse of the Constitution. He doggedly resists repeal of the military’s "Don’t Ask, Don’t Tell" policy. In short, McCain is no friend of the LGBT community.
For their part, neither Obama nor Clinton favors same-sex marriage. But each has gone on record supporting civil partnership recognition that would include Federal benefits. Both Democrats would seek to abolish "Don’t Ask, Don’t Tell" and at least portions of the Defense of Marriage Act (Obama would repeal it all).
Clinton and Obama issued compelling statements following gay teenager Lawrence King’s murder. Both support hate crimes legislation and a federal measure that would ban discrimination against gays and lesbians in the workplace. Much to his credit, Obama has publicly called on ministers in African-American churches to denounce homophobia—a politically risky move.
You won’t hear McCain speak out against homophobia or lead any efforts to achieve equality. He will be too obligated to the religious right to do so, even if he were inclined. McCain would have the potential, however, to appoint two to three justices to the Supreme Court, and you know which side of the political spectrum they would represent.
For the Democrats to stop McCain, the party must come together and coalesce behind a candidate. They must do this quickly before any of the bruises become lethal. And they should remind the voters of the information contained in the first four paragraphs of this column. That would seal the deal.