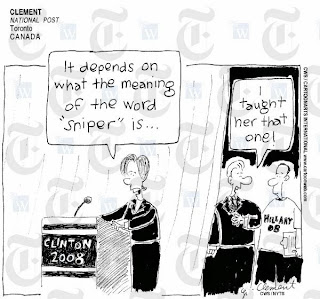 Why did the media and Obama for that matter allow Hillary Clinton to lie about taking sniper fire in Bosnia? It wasn't a "misstatement" as she alleges. She told that yarn at least 3 times under her own power. If you get shot at, you're going to remember it. There is no such thing as "almost shot at" or "I think I was fired upon."
Let's get real: she lied, plain and simple. And if the press is going to buy into her excuse that she was "sleep deprived" when she spun this outrageous tale, then why aren't they asking her, "how can you say you are best able to take that dreaded phone call at 3:00 a.m."?
Posted by Steve Charing at 4:18 PM