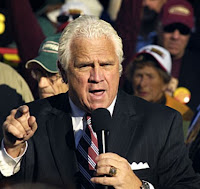 By Steve Charing
When it became apparent that Senator C. Anthony Muse (D-Prince Georges) was not going to break the stalemate and vote the Religious Freedom and Civil Marriage Protection Act out of the Judicial Proceedings Committee and onto the Senate floor, he quickly became the scapegoat. Marriage equality advocate Lisa Polyak told the Washington Blade, "I think it’s reprehensible that one person gets to determine whether an entire class of people gets their civil rights."
Carrie Evans policy director of Equality Maryland chimed in. "Until we crack the nut of Sen. Muse, marriage is not happening in the Judicial Proceedings Committee."
They should have seen it coming. It seemed like it was a foregone conclusion the bill would die in committee. Despite Equality Maryland’s extraordinary efforts to bring a diverse group of passionate advocates to testify at the hearing, the mood of many activists was pessimistic because of Muse’s public stance on marriage equality.
Sen. Muse, a senior pastor of Ark of Safety Christian Church in Upper Marlboro, opposes marriage rights for same-sex couples but is also concerned about denying civil rights to others. That concern, however, has not translated into any pro-LGBTactions on his part.
One would think Sen. Muse would have been a target for Equality Maryland following his doublecross last year. At that time he failed to vote for the bill in the same committee that would have extended legal protections based on gender identity and expression. Muse had promised the organization he would vote for the measure. There was no significant opposition to the bill in the Senate, and his vote would help clear the bill for passage.
Equality Maryland’s executive director Dan Furmansky told me then, "Senator Muse changed his vote. We had his vote. Clearly there were mysterious outside forces that made Senator Muse backtrack at the last minute."
One mysterious outside force could be none other than Senate President Thomas V. Mike Miller (D-Calvert). Sen. Miller (pictured) opposes same-sex marriage and even civil unions, and in his twilight years in the chamber, he has no stomach for an open debate on the touchy issue.
How does a powerful politico like Miller kill bills he does not want to see advance to the floor but doesn’t want the obstructionist label placed on him? He stacks committees with members who will stonewall such legislation. Sen. Muse, a Democrat, appears to be the perfect prop in that show. Who can deride Muse’s falling back on his faith for opposing LGBT progress? We can.
Equality Maryland should lead the lgbt community in two initiatives that would provide retribution to these roadblocks. First, recruit and back a candidate to the left of Muse and have him or her run against him in 2010. Muse’s 26th district includes the Ft. Washington-Camp Springs area.
This approach worked quite well when Congressman Albert Wynne was defeated in February’s Democratic primary by a more progressive candidate, Donna Edwards. Equality Maryland, with its enhanced stature, staff and resources, should be more than able to pull this off using its PAC component. It would demonstrate real muscle on the part of the organization as well as the lgbt community. Screw us at your peril.
And if you are like me and believe Mike Miller is also the villain here, there is a wonderful way to let him know how the lgbt community feels about his tactics: help defeat his beloved slots referendum. My calling for the defeat of slots in Maryland is tantamount to a robin swearing off worms, but exercising our clout in a public way transcends my penchant for the machines.
Another example of the madness in Annapolis is homophobe Janet Greenip (R-Anne Arundel). She is in the same flock as Republicans Don Dwyer, Alex Mooney and Nancy Jacobs—unapologetic bigoted extremists who oppose anything that would help the LGBT community.
When the Senate approved, over Greenip’s objections, the bill that would allow domestic partners—gay and straight—to obtain hospital visitation rights and make medical decisions for one another, Sen. Greenip was at it again.
She was concerned that undue rights would be granted to those in "highly unstable relationships." I hope she doesn’t believe that heterosexual marriages are stable given its 50 percent failure rate.
She added that if the state is going to encourage anything, it should be marriage, not cohabitation. I agree. That’s why the Religious Freedom and Civil Marriage Protection Act was crafted.
"This is not about you. This is not about me," she said before the vote. "This is about the children. What kind of future are we leaving for our children?"
I’ve been following this issue closely for years, but I have never been able to find someone who can convince me that marriage equality will be harmful to children. But Greenip constantly uses "children" as a fear tactic, and gets away with it.
The idiot Mooney also suggests that homosexuals and people "shacking up" will be rewarded by this chipping away at marriage, bill by bill. Well, give us marriage, and we won’t shack up.
Let’s be blunt. We are never going to achieve marriage equality by relying on a single organization to do the heavy lifting. We must make sure all our voices are heard loud and clear. Let’s all get involved.
I do urge Equality Maryland, however, to start making some waves. It isn’t enough to simply mark a legislator’s box, "anti-LGBT" and move on. Sometimes finding and funding alternative candidates when necessary or threatening to help kill pet projects of opponents could do the trick. Don’t you think it’s time?
This March Madness convinced me it is.
Posted by Steve Charing at 9:13 AM

There are many folks who have a hand in the fiasco of lgbt rights in the 2008 Gen Assembly. It certainly makes sense that Mike Miller would let Anthony Muse be the fall guy for marriage -- but here are some other heroes that need calling out. Feel free to follow the story -
1) O'Malley tells EqMD to let the transgender anti-discrim bill be an Administration bill through the MD Human Relations Commission - and then fails to provide any support to the bill -- committee chairs in the House and Senate refuse to accept the bill; 2) O'Malley tells EqMD that partner benefits for MD employees will be resolved throug the budget -- budget comes out with a 0 for partner benefits; 3) Maggie McIntosh obtained not a single co-sponsor for the marriage bill, gave no interviews to the press supporting the bill, and tells constituents on Lobby Day not to expect any progress on marriage since all the political courage was used up during the special session. However, she insisted on pencilling herself in as the #2 sponsor of the marriage bill. EqMD even caught her talking down the bill to other legislators and had to confront her during the session. For someone with enough political capital to be the heir apparent to the Speaker's job, she is willing to spend zero on lgbt issues despite wanting the gay community to think otherwise. She is always happy to tell lgbts about her cred -- but we don't need persuading. Can anyone name a single colleague she persuaded or brought in to support the marriage bill ?? Check it out !

"Annonymous" tips don't lead to a story. If what you say is true, come forward. Your identity will be kept confidential. But I cannot act on this alone.