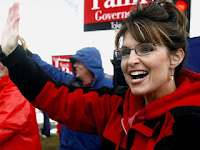 The Democrats are fretting about the phenomenon called "Palinmania" because the last two weeks have focused on this neophyte and showed that Obama's lead has vanished in the national polls. Plus McCain's support in what was at one time possible battleground states has firmed up.
Take a deep breath, folks, and put this in perspective.
McCain benefitted from a good but not overwhelming bounce from his convention and was turbo-boosted by the unlikely selection of Sarah Palin as VP contender. With all the media attention and excitement generated by this pick and its accompanying hoopla, and the fact that any bounce Obama would have received from his sterling convention was truncated by McCain's startling announcement the next day, keep in mind one thing: McCain only netted 5 points since July, according to the most recent Newsweek poll.
Here's another fact: Palin has already seen her zenith. Little by little, the truth about her experience in governance, the ethical issues, her extreme social views (e.g. inquiring about book banning, favoring the teaching of creationism in the schools, her complete unmitigated opposition to abortion whatever the circumstances, etc.), her lack of foreign policy cred, and her hair-trigger, belicose impulses towards our adversaries will chip away at the myth until reality sinks in. In short, her sizzle will likely turn to fizzle at the end of the day.
But Obama should not sit by and wait for that to happen. He should seize upon Palin's popularity and the media's obsession with her (CNN actually had cameras trained on the tarmac at Anchorage airport awaiting her arrival) and taunt McCain, perhaps during the debates, by saying Republicans prefer her--a celebrity no less-- to be at the top of the ticket rather than him. Don't fight the tide--use it to go after McCain. He'd hate that.
That's not a stretch. Even during McCain's yawn-inducing speeches, the crowd, who came mainly to see her, shouts out "Sarah"! That's why she will be at his side so often. Not only to prevent a likely gaffe on big issues and to cloister her from the media, but also to keep the crowds stoked and large.
She cannot peak any higher. Revelations about her will surface that will chip away at the pedestal. Eventually, if played right, she will fall.
Don't fret Democrats.