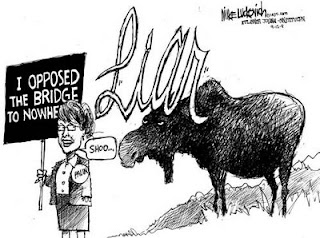 Letter sent to the Baltimore Sun

That Ron Smith still wonders why the media would want to learn about Gov. Sarah Palin while, in his view, they do not scrutinize Sen. Obama is a head scratcher of epic proportions ("Media pummel Palin while Obama gets kid gloves," Sep. 17).
Sen Obama has been on the campaign trail for nearly two years, and his background and record has been thoroughly vetted by the media as well as his opponents. Gov. Palin, on the other hand, is new to most Americans living in the lower 48. Since she is potentially in line to be a heartbeat away from the presidency, it is not only wise that she be extensively vetted but it should be demanded.
The so-called "Palin effect" has diminished with revelations about her approach to governance, her record, and her lack of truth telling. Although the McCain campaign is doing everything they can to shield Gov. Palin from the media, every day the public is coming to realize that she is not the maverick she pretends to be but the type of politician most people deplore.
Sen. Palin's blatant lies about accepting earmarks, her role in the "bridge to nowhere" controversy, her alleged trip to Iraq, the false claim that her TelePrompTer malfunctioned during her acceptance speech, and her exaggerated statement regarding the proportion Alaska's oil supply to the American total output are all indicators that this hockey mom's sizzle will turn to fizzle. And Ron Smith cannot face that truth.
Steve Charing
Posted by Steve Charing at 12:18 AM