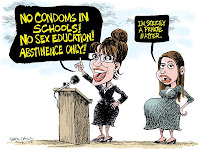 The prevailing mood concerning the pregnancy of Bristol Palin is that this is a private matter and should not be politicized. Senator Barack Obama said as much. Moreover, the McCain camp wants no further inquiries into the background of Sarah Palin. That's realistic! Someone needs to; his staff sure didn't.
What should be called into question regarding Bristol is her mother, Vice Presidential candidate Sarah Palin. She vehemently opposes sex education in the schools and promotes abstinance programs instead. You can see how that strategy paid off.
Besides the obvious hypocrisy lies the fact that two teenagers are forced to marry because of political necessity. Yet there are tens of thousands of same-sex couples--many involved in extensive long-term, committed relationships that exceed the combined ages of Bristol Palin and father-to-be Levi Johnston--who cannot legally marry outside of California and Massachussets. But because of a mistake and the fact they are heterosexual, Levi and Bristol can.
Levi seems to be brainwashed about this fallout. He blames Obama, who was his "hero" on his MySpace page prior to Palin's being tapped as VP candidate. He blames the media as well. Nevermind that the revelation about Bristol's situation originated with her parents. And he once indicated on his page that he didn't want children. Oops!
Adapting to his newly found celebrity, Levi lashed out at his detractors by writing the following on his MySpace blog:
"I wont be run out of myspace just because of some fuckin newspaper people working for obama. What my future mother-in-law is doing has nothing to do with me or Bristol, but I want everyone who reads this to know, every time they attack us for being human, they show why America needs leaders like Sarah Palin."
So Levi cleverly turns his own personal failings, lack of self-control, maturity and judgement into an attack on the media and Obama. For the GOP--Mission Accomplished!
Posted by Steve Charing at 11:32 AM