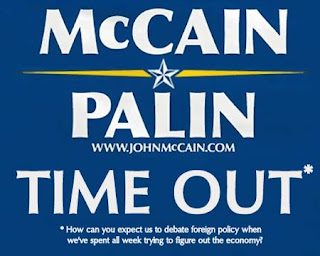 Rep. Barney Frank said it best: "It's the longest Hail Mary pass in the history of either football or Marys."
John McCain's shocking announcement that he will suspend his campaign that included a desire to postpone the first of three presidential debates was seen by many as a political stunt and nothing more. He is not even on the Senate committee dealing with the financial bailout package, yet he feels it is far more important to bring presidential politics to an already dicey situation then to allow the country to hear his views, regardless how contorted they are.
The real underlying motive for this bold but cynical action besides trying to grab the headlines (again) was to blunt the momentum of Barack Obama. The financial meltdown provided wind behind Obama's back as the Palin effect on the McCain ticket ceased and started to retract. As polls are starting to open up measurable leads for Obama, McCain needed a game changer.
There was already too much discussion on how his fervent anti-deregulation stance was a significant contributor to the current mess. He was flailing around like a just-caught fish on the boat's deck in response to this crisis. He needed something unexpected and big.
But he already stunned the world with his selection of Sarah Palin. What else could he do?
McCain is probably and rightfully concerned that debating Obama on McCain's self-proclaimed strength on foreign policy issues could spell disaster for the Republican. Obama merely needs to pass the threshhold of acceptability on foreign affairs and then hold serve on economic policy to put away the election. The debates provide a denouement in the campaign, and it appears the way things have gone the past couple of weeks, McCain was facing the abyss.
The McCain campaign already knows it's in trouble. With Obama leading in Florida despite the fact he never campaigned there during the primary should be disturbing for the GOP without question.
However, the biggest warning light for McCain is in West Virginia--a state that has gone Republican the past two presidential cycles. Here Hillary Clinton thumped Obama in the primaries with the largest of all margins. It is here where Obama is said to have not connected with white, working class, non-college graduates. But guess what? McCain is ahead by only 4 points! That's telling.
And that's why McCain is flustered, confused and off message and needs to try something drastic. Doesn't that sound reassuring when that 3 a.m. call is made?
Posted by Steve Charing at 8:39 AM