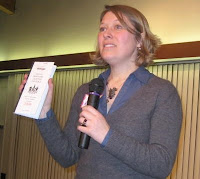 "We’re in a good place legislatively"
By Steve Charing
Although the 2009 Maryland General Assembly will be intensely focused on a widening budget deficit amidst a weakening economy, Equality Maryland plans to advance a legislative agenda to achieve social and economic justice for the LGBT community. Several carryover initiatives from last year will form the core of Maryland’s largest civil rights organization’s efforts during the next few months.
The Gender Identity and Expression Anti-Discrimination Act will be at the forefront of the lobbying group’s priorities. The bill, which failed to emerge from the Senate Judicial Proceedings Committee last year by one vote, is designed to add gender identity to state laws that already prohibit discrimination in employment, housing, public accommodations and credit based on factors, such as sexual orientation.
Kate Runyon, the new Executive Director of Equality Maryland, noted during a presentation at the January 13 general meeting of PFLAG-Columbia/Howard County that protections for transgendered people had won the support of Governor Martin O’Malley when he was Mayor of Baltimore. "So why not support it at the state level as well," Runyon asked. His leadership would be crucial in getting the measure out of committee and onto the floor for a debate and vote.
To underscore the priority Equality Maryland is placing on the transgender bill, the organization is scheduling a separate transgender rights Lobby Day session to take place in Annapolis on February 16.
The regularly scheduled Lobby Day will be held on February 2 with Equality Maryland focusing on people of faith. To amplify that theme, Bishop Gene Robinson, the openly gay bishop of the Episcopal diocese of New Hampshire, will be the primary speaker at the rally. "He will be speaking about the importance of LGBT people of faith, being families of faith, and standing up for equality and justice," said Runyon.
Besides Bishop Robinson, Kate Runyon, who had worked on a wide range of LGBT issues in Michigan before she replaced Dan Furmansky as the executive director of Equality Maryland, will speak at the rally, which begins at 4:30 p.m. at Lawyers Mall. Lisa Polyak and Gita Deane, the two lead plaintiffs in the unsuccessful lawsuit to end the ban on same-sex marriage in Maryland, will also address the crowd, as will several elected officials.
Equality Maryland is scaling back expectations regarding passage of the Religious Freedom and Civil Marriage Protection Act during the upcoming session. According to Runyon, the goal is to work with people to increase sponsorship this year.
When asked if Equality Maryland may try to secure civil unions in the short-term given that there is broader consensus among the legislators for that and Governor O’Malley has signaled that he would sign the measure into law, Runyon said the organization would rather wait for a marriage bill to succeed.
Noting that civil unions fail to offer the same protections as full marriage, Runyon explained, "The political climate in Maryland is favorable for passage in a few years. With patience and by lining up the right people we will achieve full equal marriage."
Another bill that will be pushed by Equality Maryland deals with removing the costly inheritance tax on same-sex partners. The measure would add same-sex partners to those already exempted from paying inheritance taxes. Unless remedied, the tax liability upon the death of a partner could be very costly. "This is an area that we need more equality very quickly as well," said Runyon in front of 50 people attending the PFLAG meeting.
A new bill will be introduced that addresses the legal rights of co-parents. This "first-of-a kind" measure would allow a partner without a legal or biological relationship to a child to petition a court for custody and visitation rights for the child they have parented if the partners broke up.
Displaying a Midwestern folksy style aided by humorous anecdotes , Kate Runyon explained the best techniques to be used when lobbying legislators and how to win them over. She emphasized the need to be collegial and respectful as opposed to showing anger and being aggressive. "We should be gentle but firm and with a presence."
She also suggested that children of partners be brought to the lobbying sessions with the legislators because they can make a powerful impression. "Why can’t my Mommy marry my Mommy?"
More information about Lobby Day and the legislative session is at http://www.equalitymaryland.org/
Posted by Steve Charing at 12:15 PM

Thanks Steve- I look forward to a good relationship w/Kate and Equality Maryland. I think together we can accomplish a lot.