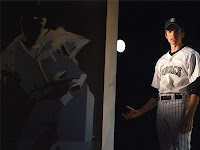 A gay baseball player coming out would have to face tough challenges.
By Steve Charing
When the steroids scandal first hit major league baseball several years ago, I theorized it provided a convenient distraction for a gay player to finally come out. I had believed that cheating in a game that depends so much on tradition and integrity would overshadow any pesky disclosure that one of the players is gay. Or so I thought at the time.
I feel differently today.
No question, the steroids scandal is serious enough. Superstars Barry Bonds and Roger Clemens who are suspected of using steroids will most likely see their dreams of being admitted to baseball’s hallowed shrine—the Hall of Fame—dissipate.
But as long as a player in question didn’t lie to Congress or a law enforcement official, an apology here and an apology there would generally get the player off the hook, especially if he’s popular. Alex Rodriguez’s recent mea culpa tried to accomplish that even if he, too, could be spurned by the Hall of Fame voters.
Baltimore Orioles’ second baseman Brian Roberts is another good example. A couple of years ago he had been named in the Mitchell Report, which identified major league players who had allegedly taken steroids. Roberts apologized and insisted he made this mistake only once in 2003.
Brian Roberts is a favorite of fans as well as the team owner, Peter Angelos, for a variety of reasons. He is one of the premiere leadoff hitters in the game and a defensive stalwart. He works hard for charitable causes in the Baltimore community and is also easy on the eyes. Fans love him. Teammates love him. The owner loves him. He snagged a $40 million contract extension despite the steroids admission.
An active baseball player who publicly comes out that he’s gay would face greater challenges. My earlier opinion was that after a brief media circus surrounding the gay revelation, the hoopla would eventually fade away. For instance, if he was a good player, the fans and teammates might see past that and concentrate on team goals, as depicted in the Tony Award-winning play Take Me Out [see photo].
Although the general environment for gay acceptance is improving and the fact that each year several cities hold "gay days or gay nights" at major league ballparks, we’re not there yet. A gay ballplayer’s coming out may spark celebrations within the LGBT community and among progressive-minded folks, but that’s it.
More likely a firestorm from conservative religious organizations with their predictable sanctimony and threats of boycotts would ensue. "What examples are we setting for the children?" "Depravity has seeped into our American pastime."
This faux outrage could easily apply to the players embroiled in the steroid scandal, but nary a protest had been fired off by Focus on the Family, the Family Research Council or like-minded groups in that regard. You never hear them threaten boycotts when disclosures of adultery and criminal behavior surface among the major sports even though the Bible condemns those acts as well. To them, homosexuality is the bottom rung.
Besides the noisy clatter put forth by these groups, the gay ballplayer’s biggest hurdle is calming down a potentially hostile clubhouse. While it is likely that one teammate will stand before the bank of microphones and proclaim his loyalty to the gay player and extol the virtues of team unity and mission, the majority of the team will probably not be as embracing.
The issue is exacerbated by the fact there are many devout Christians in major league baseball (some have been steroids users) who see homosexuality as a sin. Added to that is the players’ fear of gays being in the same locker room.
Then there is the increasing number of Latino and Asian ballplayers in the major leagues. This is not to say that they are all homophobic or that American-born players are not. Yet the traditional macho-oriented cultures of these groups tend to revile homosexuality.
These challenges alone might keep a gay baseball player in the closet. But then there is the question of product endorsements and other financial considerations. Olympics hero Michael Phelps retained most of his endorsement deals but Kellogg’s dropped his contract as soon as the photo of Phelps’ smoking a bong flew around the world.
How would corporate America deal with a gay athlete? While many of the Fortune 500 companies have anti-discrimination policies for gays and lesbians as well as domestic partner benefits on the books, I imagine they will succumb to the threatened boycotts of the well-organized and well-financed conservative flame throwers and not offer endorsement deals.
The best hope for a gay ballplayer in coming out will rest with the fans. A gay player, especially one who is good at his craft and is popular, has a decent chance to be favorably received over time. Fans tend to be ahead of the players when it comes to social issues.
I suspect, however, the noise from the zealots and the fear of a dysfunctional locker room will keep the athlete secure in his closet for a while longer. We’ll just have to wait for a gay version of Jackie Robinson who can courageously negotiate the slippery terrain of the OUTfield.
Posted by Steve Charing at 11:35 AM

I found your piece kinda interesting in a musing kind of way. Not that I'm a baseball fan. I'm not. Boxing, football, college basketball, and even tennis, but baseball, no. Yet, I found your points interesting in the context of all sports, and the acceptance and forgiveness of fans for many of the indescretions and crimes that players commit. And how being gay is worse. But you lost me when you sought to blame Latino players for the cowardness that is being closeted. If that absurdity were true, why were there not more players that disclosed their being gay? As a latino, I'm not sure you are not just blaming others for your own peoples cowardice.

Steve Tabarez: You lost me on your comments regarding Latino ballplayers. I did not use or imply the term "coward."

Here's what I wrote concerning Latinos:

"Then there is the increasing number of Latino and Asian ballplayers in the major leagues. This is not to say that they are all homophobic or that American-born players are not. Yet the traditional macho-oriented cultures of these groups tend to revile homosexuality."

All I'm trying to say is that Latinos are among many groups whose cultures look down on homosexuality, which would make a gay ballplayer less comfortable if he came out. This is especially true because of the increased numbers of such players. It has nothing to do with cowardice.

Sorry if I wasn't clear. I said that I felt that you were blaming the influx of latino players for what might actually be the cowardice of closeted players in the dug out. Seemed that you thought that more might be willing to come out if there were less of them. I failed to see the correlation. If non-latinos fail to come out no matter who is with them, that says more about their own cowardice than the cultural morés of latinos. Don't blame us for sports being so homophobic. As I asked before: Why weren't more baseball players coming out before the influx of latino and asian players?

Latino and Asian players are not being blamed. In fact, a gay player could actually be Latino or Asian. There are many white ballplayers who are likely to be homophobic, especially those from the south or rural parts of the U.S. That's who largely kept gay ballplayers in the closet. But Latinos and Asians, because of their well-known views on homosexuality clearly didn't make it a better environment for a gay player to come out, and they are entering the big leagues in greater numbers.

I recently came across your blog and have been reading along. I thought I would leave my first comment. I don't know what to say except that I have enjoyed reading. Nice blog. I will keep visiting this blog very often.