A Thousand Times, No! 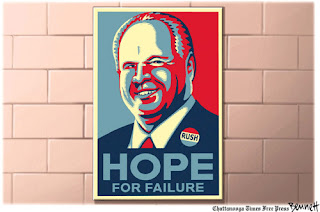 It is clear why the Republican Party has diminished to the extent it has. Even when they had bad ideas (which is most of the time) they at least had ideas!
Now, shell-shocked by two consecutive disasterous election cycles, they are floundering, leaderless and lost; their main playbook consists of the unpatriotic hope for President Obama to fail (Limbaugh, Jindal and the like) and just saying "no" to everything, regardless of merit. The "Party of No" indeed.
No to the stimulus. No to the bailouts. No to Obama's budget. No to common sense.
Alternatives? Hmm. No!
Yesterday, the GOP was to roll out an alternative budget. April Fools Day showed up a week early. Sorry, no numbers, just a "blueprint." The "deer in the headlights" look of Rep. John Boehner when asked by a correspondent from the conservative National Review where the details were was telling. The confused, irritated and vapid reponse by Boehner symbolized exactly the state of the GOP.
A promised alternative budget with no numbers, projections, trends, charts is incredible. Just typical GOP ideological bunk about smaller government: tax cuts, deficits, etc. Except for the tax cuts for the wealthy, these principles were no-shows over the past eight years.
As long as they continue to become a laughing stock, with these PR snafus, Joe the Plumber positing on economic policy, and with Michael Steele at the helm of the RNC, the GOP will remain the Party of No-- to voters.
Posted by Steve Charing at 10:17 AM