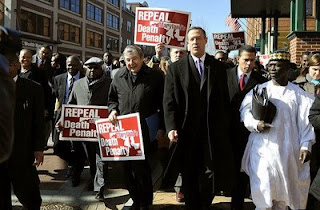 The Governor expends political capital demonstrating on behalf of convicted murders. Would he ever march for LGBT equality?
By Steve Charing
When I viewed the peculiar news footage that depicted Governor Martin O’Malley marching down West Street in Annapolis with others in his quest to end the death penalty, I was taken aback. My reaction was, O’Malley is protesting the death penalty in such a public way, but we can’t even get him to commit on same-sex marriage rights for Maryland’s gay and lesbian couples or on transgender protections.
The governor has seen his approval numbers fade since his election victory in 2006. He has had to face serious budget and economic issues where no matter which course of action he decided on, he was roundly criticized. This takes a toll on popularity and hence political capital, and the governor has little left to spend at this point.
But during the current General Assembly, Governor O’Malley made a decision that whatever political capital he has remaining, he was going to use it on repealing the death penalty. He cites his Catholic faith as the basis for his passionate effort to close down the death chamber in Maryland once and for all.
This is not a bad cause to be sure. I had once supported the death penalty believing it as a way to prevent repeat offenders. But I saw the inequities in its application and the potential deadly inaccuracies. And my views on the issue were cemented after reading John Grisham's The Chamber.
Despite Governor O’Malley’s public advocacy for repealing the death penalty, the Senate’s Judicial Proceedings Committee killed the measure. That normally puts the kibosh on the initiative right then and there for the current session. However, Senate President Thomas V. Mike Miller eschewed the procedural protocol and decided to send the bill to the Senate floor for a full vote in deference to Mr. O’Malley’s office.
Of course, Mike Miller, who supports capital punishment, counted the votes in advance and is fully aware that complete repeal won’t pass the Senate. But this grand gesture, disingenuous as it appears, proves that if the governor takes a strong stand on a measure, it might, with help from the mega-powerful Senate president, bypass the usual customs and allow it to come up for a vote by the full Senate.
Contrast the governor’s high profile efforts to repeal the death penalty with his reticence on the major LGBT issues, especially same-sex marriage. Gay activists who overwhelmingly supported Mr. O’Malley’s election bid with votes and cash have been stymied by the governor’s avoidance of the hot-button issue.
Governor O’Malley got off on the wrong foot when immediately following the state’s Appeals Court ruling in September 2007 that upheld the current marriage laws defining marriage as between one man and one woman, he stated on television that "no one should redefine the sacraments."
Many activists, including some of the plaintiffs in the original lawsuit, were rankled by those remarks noting that he clearly knew what was being sought was civil recognition, not religious blessings. Others were miffed at his apparent backtracking of his position since 2004 when he allegedly supported same-sex marriage.
During the 2008 General Assembly, the governor was virtually invisible when the Religious Freedom and Civil Marriage Protection Act was introduced. The framework of the bill made it clear, mainly to address concerns of the governor and legislators, that civil marriage equality was the goal and that no religious institution would be forced to officiate any marriage ceremony with which they do not agree.
Even with 49 sponsors in tow and the religious concerns ostensibly addressed, the bill died in the Senate Judicial Proceedings Committee. The governor could have made a difference had he chosen to support the measure in earnest.
Governor O’Malley stated during the session that he would sign a civil union bill if one came across his desk. But Equality Maryland, the state’s largest LGBT civil rights organization, decided such a route would be unacceptable and pushed for full marriage equality instead.
Moreover, the governor has yet to publicly offer his support for the Transgender Anti-Discrimination bill, which would add gender identity to existing state law prohibiting discrimination in employment, housing, public accommodations and credit. As mayor of Baltimore, O’Malley signed a similar law in December 2002.
A march down Annapolis streets by Martin O’Malley to support marriage equality and transgender protections is a dream that is unlikely to materialize. Even a surprise visit to the Lobby Day rally last month where he could have addressed the crowd in front of the media on these important civil right issues was do-able and would have been extraordinary.
Former Governor Parris N. Glendening used the political capital he received from his 10-point re-election margin and pushed for legal protections for gays and lesbians. In 2001, he signed into law the historic bill that would prevent discrimination based on sexual orientation.
We were fortunate that Glendening used his political capital for our cause before it rapidly eroded. There doesn’t appear to be enough gas in the political tank for Martin O’Malley to lead both the death penalty fight and advance lgbt rights, not to mention addressing the economic havoc, which is devastating the state. He has already expended his dwindling political capital on behalf of saving the lives of convicted murderers.
To his credit, the governor recently stated his support for a domestic partnership bill for state employees. With other measures needing his backing, will that be enough to get the LGBT community to march with him to the polls?
Photo Credit: Baltimore Sun photo by Glenn Fawcett / February 25, 2009)
Posted by Steve Charing at 1:09 AM