Youth Are Showing Us the Way 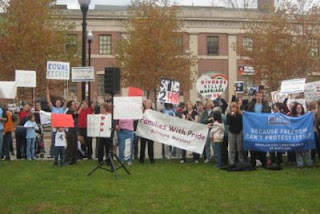 By Steve Charing
The burst of energy displayed by the young people who participated in the protest of the homophobic, Kansas-based Westboro Baptist Church on March 30 was breathtaking. They demonstrated against the Fred Phelps-led hatemongers who had marked Towson High School for its Diversity Club and Gay-Straight Alliance. Phelps, himself, was absent, but a handful of his family members brandishing absurd, hate-filled slogans on their familiar placards did the deed.
Aside from students from the targeted school, kids from other high schools in the area as well as local colleges voiced their opposition to hate. And they did it loud and clear. Even straight "jocks" from Towson High School—a group that in years past wouldn’t ordinarily be expected to join forces with the pro-LGBT demonstrators—supported the cause openly.
While other groups participated, such as PFLAG, church organizations and an assortment of adults bent on social justice, the youth stole the show. They enthusiastically cheered at each passing car that honked its horn in support. They shouted down the Westboro clan on the other side of York Road. They publicly voiced their opposition against hate and expressed their affirmation towards love and equality. They support gay rights in all forms and did so with fervor.
All told, around 300 people overwhelmed the 6 Westboro crazies both in numbers and passion.
Back in November, there was a nationwide protest of the passage of Proposition 8 in California. Locally, a thousand people gathered outside Baltimore’s City Hall on a rain-threatened Saturday to plea for marriage equality and express their outrage aimed at the California results (photo).
There were many adults there to be sure, and a significant number of them were straight allies. But there were also plenty of college students who descended upon the War Memorial Plaza in clusters from all directions like an invading army. Waving colorful hand-made posters displaying pointed messages, these youthful protestors surprised even veterans of demonstrations of yore with their verve and commitment.
The center of gravity for LGBT politics and activism is steadily shifting to the youth. This is not just manifested by the increasing number of young LGBT people who are coming out at a faster rate than in previous generations. It has been bolstered by an astounding number of youth who simply shrug off the existence of LGBT people as no big deal.
Although much of these changing attitudes by straight youth can be attributed to their expanding exposure to lgbt peers, the more welcoming culture with which these people are in tune, reinforces their beliefs. For example, the role MTV has played for the past two decades in enlightening the youth of this country concerning LGBT issues cannot be understated.
The network’s programs routinely depict LGBT youth as ordinary people with the same family, social, economic and psychological issues facing all teenagers. This season’s run of Real World was so well done, that in the show’s later episodes, it was difficult to notice that the "house" included a gay man, a bisexual woman and a transgendered woman living with five straight peers.
The gay element eventually played a subordinate role when other weighty matters took over, like how one of the cast members was facing an uncertain future as he was recalled for another tour of duty in Iraq.
As the episodes rolled along each week, the ultimate conflicts weren’t between gay and straight and straight and transgender or even gay and transgender; they existed among each other regardless of who they were. Gay, bisexual, transgender? Oh yeah, so what.
This is the attitude that is prevailing among young people today. A straight kid may argue with a gay kid, but odds are, it has nothing to do with sexuality. Conflicts centered on sexual orientation do exist, of course, but to a lesser degree.
Of course, there still are incidents of bullying and epithets like "that’s so gay" in schools. But the trend is definitely moving in a favorable direction.
Politicians would be smart to take notice of these shifting attitudes. The youth have been swelling the voter ranks and affecting elections. The Obama phenomenon brought more young people into the political process than any time since the 1960’s.
Elected officials who experience trepidation about supporting equality based on gender identity or are skittish about conferring rights to same-sex couples are doing so at their peril. The old-time attitudes are dying off. The new generation of kids—gay and straight—will show us the way and those backward-thinking politicians the door.
Posted by Steve Charing at 9:03 PM