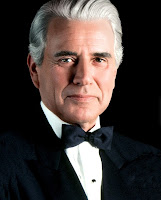 John Forsyth's passing leads to a nostalgic look back at his most popular TV series and what it meant to gays.

He may not have had a cult following among gays in the way the late Bea Arthur did, but John Forsythe, who died on April 1 at the age of 92, will always be linked to gay culture, whether he wanted that or not.

Although Forsythe had been a stage actor and appeared in over two dozen films since the early 40's and numerous television shows as well, he will always be best remembered for his performances in Bachelor Father, Charlie's Angels, and his biggest of them all—his role in Dynasty.

Dynasty was an extremely popular campy series that ran from 1981-1989 and was the ABC network's answer to CBS' Dallas. But, it was oh so much more fun!

Yes, the plotting, bitchy, conniving Alexis played by Joan Collins was the darling of gay men during the show's run, and her catfights with co-star Linda Evans' character (Krystle) were legendary. But the primetime soap opera's plot revolved around the family's patriarch, Blake Carrington—the debonair, gravelly-voiced oil tycoon played by Forsythe. He was the only actor to have appeared in all 220 episodes and received three Emmy nominations. Forsyth also appeared in the short-lived spin-off The Colbys from 1985-1987.

Other than the outrageous campiness that attracted such a legion of gay fans, Dynasty had specific gay subplots. Forsythe's character Blake had a son who was gay—Steven—played by Al Corley. Blake wasn't exactly the model PFLAG dad at first and overtly argued bitterly with Steven over his sexual orientation.

Under pressure from ABC, Dynasty turned Steven into a closet heterosexual leading Corley to exit the show in protest after two years. In came the replacement, actor Jack Coleman, who had no physical resemblance to Corley. The plot line, as I recall, had Steven in an oil rig accident, sustained massive burns, and Coleman magically emerged sans bandages from extensive plastic surgery. For all intents and purposes, the gutsy move to include an openly gay character on a highly-rated primetime drama in the 80's went up in flames along with the oil fire. Steven ostensibly was gay no more.

Nonetheless, Dynasty Parties were prevalent throughout the decade. Gay bars across the country held such events each Wednesday night. Private parties were also common in people's homes. It was quite the rage then.

Darkness and tragedy hit the set of Dynasty. From 1984-1985 well-known actor Rock Hudson, who landed a role in the series as Krystle's love interest, experienced a marked and noticeable deterioration in health and his appearance. His speech, too, was affected, and rumors were flying as to what is happening to this once strapping Hollywood icon.

Hudson had been diagnosed with AIDS on June 5, 1984. When it was obvious he was seriously ill, his publicists put out the word that he had inoperable liver cancer. It was not until July 25, 1985 while in Paris receiving treatment did the news break that the actor, who never publicly disclosed his sexuality, was suffering from AIDS. He died on October 2, 1985.

Hudson's death put an important face on AIDS because there was so much misinformation about the disease and its transmission; it was an abstraction to most people. But a prominent celebrity like Hudson gave it more humanity and opened the hearts of minds since his death. Even his old friend then President Reagan finally came to grips with the scourge of AIDS albeit in his second term.

On the Dynasty set, there was a lot of controversy stemming from the revelation about Hudson's battle with AIDS. Still uncertain about the disease's transmission in 1985, Linda Evans publicly expressed deep concern about her kissing Hudson in a number of scenes while he had the disease. She was also angry that the revelation occurred after she had participated in that activity.

Dynasty, as it turned out, was a soap opera within a own soap opera. The controversies among cast members, the plot lines, the ill-advised Moldavia wedding shoot-out, the oddball cliff hangers, contract squabbles and the Rock Hudson matter were pushed to the forefront. But John Forsythe, just like his character Blake Carrington, kept the ship afloat with his strong, steady hand.

Rest in peace, and thanks for the memories, John.

Posted by Steve Charing at 3:39 PM