Stars on the Rise in Howard 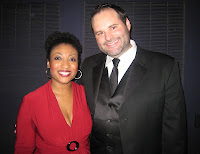 The audience at the 15th Annual Celebration of the Arts gala at Howard Community College selected two stars in the talented galaxy to become this year’s winners of the Rising Star competition. Samantha McEwen finished first in the balloting and came away with a $5,000 prize. Luke Grooms was a second place winner and received $2,000.

Established in 2003, the event, which was also a fundraiser for the 31 year-old Howard County Arts Council, took place at the Peter and Elizabeth Horowitz Visual and Performing Arts Center, Howard Community College in Columbia, MD on March 24. The contestants had to be either residents of Howard County or had to have performed there.

Ms. McEwen dazzled the audience with her rendition of “Your Daddy's Son” from the musical Ragtime—a show she will be performing in May at the Laurel Hill Playhouse.

Opera-trained at the University of the Arts in Philadelphia and later studied at the Ward Acting Studio in New York, McEwen has performed in numerous operas, plays and musicals throughout the country. She was also the 2011 nominee for the Broadway World Baltimore Awards.

“Winning has been overwhelming for me,” McEwen told Baltimore OUTloud. “There was a time when I was too shy to really sing in front of people and standing on that stage with that star, in front of my friends, family, and supporters, really showed me how far I've come.”

For his part Luke Grooms, who was profiled in Baltimore OUTloud in December 2010, offered a powerful, stunning performance of “Si, Ritrovarla Io Giuro” from La Cenerentola (Cinderella) by Rossini. The tenor has sung at the Met, the New York City Opera, the Baltimore Opera Company as well as other venues playing over 30 roles. He has also established himself in musical theatre including singing in the New York premiere of Jerry Springer: The Opera. In addition, he appeared in Phantom of the Opera at the Hippodrome two years ago.

“It is so great to be recognized in this competition because it is the audience that votes and chooses who receives the prizes,” Grooms said. “It is great to know that what we do as artists is appreciated and loved.”

There were nine finalists in the competition who performed a variety of musical genres including vocal performances, Irish dance, bassoon, percussion, and violin. One of the competitors, Mark Allen, who beautifully sang “Lost in the Wilderness” from Children of Eden, was featured in the February 24th issue of Baltimore OUTloud.

In addition to the competition, other awards were handed out to several individuals who have worked hard to advance the arts in Howard County.

As the votes were being tabulated, a large singing ensemble called The Young Columbians offered a medley of pop chart-toppers. The group, consisting of local students from grade school to high school, was formed in 1975 by Toby Orenstein, the owner of Toby’s dinner theaters. She continues to direct the current Young Columbians today, who received a standing ovation following their performance.

Posted by Steve Charing at 2:27 PM