We Must Never Forget

The Trump threat is real for LGBT individuals

On a given night, hundreds would cram the city’s streets, some carrying a gay periodical, and patronize the dozens of gay bars, cafes, nightclubs, pornography shops, cabarets and bathhouses.  Adding to the crowd was an ample supply of hustlers that was visible along the dim, nighttime corridors.

Inside the buildings, female impersonators, clad in lavish brightly colored garb, performed amidst a foggy, smoky cloud that enveloped the jammed rooms.  Toe-tapping songs were played to the resounding joy of the gay and straight audiences of the packed nightclubs and cabarets with the music drifting outside into the streets.  #hocopolitics

In other establishments, men freely danced with men; women danced with women.  They openly embraced.  An anti-gay law on the books was seldom enforced.  Gay life was colorful, free and vibrant. Gay neighborhoods were established throughout the city.  It had the most active gay culture on the entire continent, and it was a sexual Mecca.

It happens to be Berlin, Germany, just prior to the Nazis’ rise to power.  Indeed, it was estimated that there were more gay establishments and periodicals in 1920 Berlin than in 1980 New York.  Not only was homosexuality tolerated, it flourished. 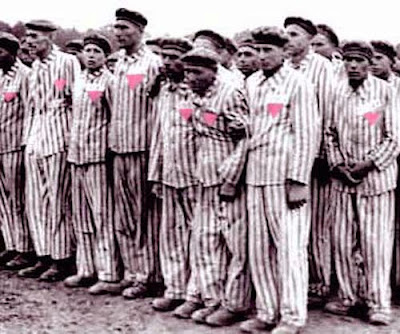 But as the music played inside Berlin’s gay clubs, sweeping political and social change was about to unfold that would rock the world.  The patrons (and owners) of these establishments were oblivious to the new political reality; they continued to dance, seek out sex partners and lived in their own secluded, care-free world, unsuspecting of the emerging satanic forces and the horror of what was about to befall them. It sneaked up on them, and when they realized what was happening, it was too late.

As fast as a snap of a whip, there was the accession of Nazism and Hitler and the enforcement of the infamous Paragraph 175 that severely criminalized homosexual behavior. All gay clubs, hotels and other similar establishments were closed down.  Known homosexuals were ordered to appear at police stations and were pressured to identify other homosexuals. School children were asked to inform on teachers who were suspected of being homosexual, employers on employees, and vice-versa.

Their tragic journey had begun. Gay men in Germany were sought out and rounded up with most being shipped to concentration camps for imprisonment and extermination.  They were forced to wear a pink triangle for easy identification and lived in separate blocks apart from the other prisoners.  The prisoners wearing the pink triangles were brutally treated by the guards and by inmates from other categories.

Homosexuals and those supporting abortion were seen by the new government as a threat to the Nazis’ dream of world dominance.  It was as much about the lack of procreation as the lack of morality.  For gay men it was also about their lack of masculinity—it did not fit the Aryan paradigm.   They joined Jews, gypsies, criminals, political enemies, Communists, the disabled, epileptic and other outcasts that did not conform to the Third Reich’s master plan.  (And yes, Trump White House, accept it or not, Jews constituted the overwhelming majority of the victims during the Holocaust.)

Approximately 100,000 gay men were arrested, 50,000 sent to prison camps, and hundreds were castrated.  All told, an estimated 10,000 to 15,000 homosexuals, mainly those who were deemed “incurable,” were exterminated in the death camps.  Their death rate was said to have been three to four times higher than other non-Jewish categories during the Holocaust.

As you can see, apathy can be a perilous thing, and unfortunately, it is not confined to history. 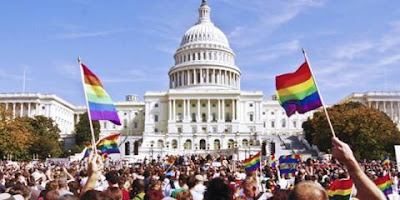 The new Trump Administration is chilling.  Though no executive order has been signed yet that would allow discrimination against LGBT people under the guise of “religious freedom,” don’t be fooled.  Virtually every cabinet appointee, every advisor, every key figure in the Administration has actively pursued an anti-LGBT agenda in his or her career.  Some of these are extreme including Steve Bannon, Tom Price, Betsy DeVos, and Jeff Sessions.

While Trump may want to play good cop, bad cop by wrapping himself in a rainbow flag for show, an anti-LGBT agenda can take hold in each of these departments and various levels within the executive branch.  Homophobic and transphobic Republicans in Congress will do nothing to stop such efforts; in fact, they have been trying for decades to foster anti-LGBT policies and stood in the way of progress.

Moreover, the Supreme Court could very possibly tilt towards in a regressive way during Trump’s term, so there may not be relief from that branch of government.

LGBT folks must be on the alert and forcefully express their opposition to efforts to turn back the clock.  The threat is very real.

And we don’t need to go back too far in history to understand the effects of apathy, complacency or indifference. The mantra, “We must never forget” applies now more than ever.