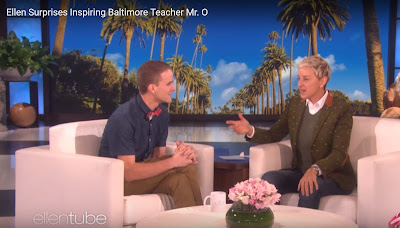 Wyatt Oroke, a Baltimore teacher for five years, appeared on the Ellen DeGeneres Show this past week to receive a series of surprises.  Oroke, who had been invited to the studio, was led to believe he was being recognized for his work in the East Baltimore City Springs Elementary Middle School with a pre-recorded clip praising his work with his students, who call him “Mr. O”.  Suddenly, he was told he was going to sit in that famous chair on the set to talk live with Ellen herself. 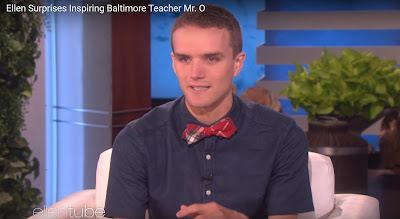 Clearly emotional and taken aback by the unexpected appearance in front of the lights, cameras and live audience, Oroke participated in a brief interview with Ellen.  Then he was stunned and became teary-eyed when a significant number of students appeared live by remote from Baltimore to offer praise of the young Humanities teacher, how he has inspired them, and how, in one student’s case, he provides the needed support since she lacks a support system at home.

If that wasn’t enough, a check for $25,000 from Shutterfly was presented to the school, again shocking Oroke. 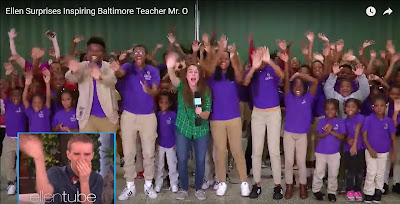 Oroke points out that the East Baltimore school is “under resourced and underserved for centuries based on political decisions that were made, segregate housing, or redlining for neighborhoods. ” This resulted in the fact his “students come from the highest poverty rates of any school in Baltimore City.”  Moreover, Oroke notes there have been homeless students every year, one lost to gun violence, some have given birth to children.

He says he tries to show as much empathy as he can and encourages his students to read by purchasing independent reading material for his students.  Oroke explains that the students need “access points” to give help provide them with equal access to opportunities. He instills the idea that “if you fill the classroom with love today, you’re gonna will fill the world with love tomorrow.”

Oroke is an ally of the LGBT community and a member of the Board of Directors for GLSEN  Maryland.

“Mr. Oroke represents the kind of teachers we all want in our schools,” says Jabari Lyles, executive director of GLSEN Maryland. “Kind, compassionate, knowledgeable about vulnerable populations and willing to go the extra mile. Mr. O once led the GSA club at NAF (National Academy Foundation) Middle School in Baltimore City, and joined our board of directors last year to broaden his impact. We are very happy to have him on our team.”

Lyles states that Oroke’s students raised thousands of dollars for the recovery effort in Puerto Rico despite being from some of the poorest neighborhoods of Baltimore.

The video of the segment is shown below:

Oroke told me, “As a proud board member of GLSEN Maryland I am always happy to be an advocate for all students in our state.”