Trump’s Lunacy Could Be His Best Insurance 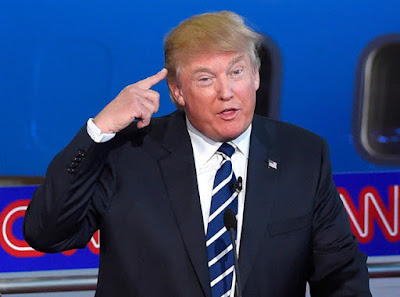 Donald Trump’s erratic behavior during the campaign was clear evidence there was something nutty about the candidate. But I actually worried when at the final debate between front runner Hillary Clinton and himself last October that he wasn’t willing to accept the results of the election should he lose. He said he would keep everyone “in suspense” as he believed (or claimed) the election was “rigged.”

This would have been extremely troublesome to say the least had Clinton won and Trump refused to acknowledge it.  What would he have done or said to his hair-on-fire angry supporters?

All his comments and tweets during the campaign and the nine months since he took office—far too many to list—give many people anxiety as he navigates towards a military confrontation with North Korea, Iran or both.

From his bizarre narcissism to his lies about virtually everything to his need to fight people who are revered by most Americans, Trump’s fitness for office has been rightly questioned.

“The President has not yet been able to demonstrate the stability nor some of the competence that he needs to demonstrate in order to be successful,” said outgoing Senator Bob Corker (R-Tenn.) in the first of several salvos lobbed Trump’s way.

I am by no means a mental health professional but it is clear Trump’s penchant for projection; i.e. blaming people for doing the things he does, should raise a red flag.  A good example would be his constant criticism of President Obama for playing golf when he, in fact, plays almost every weekend.

His obsession with all things Obama is simply startling as is his need to re-litigate the 2016 election and rub Clinton’s face in the dirt.  Trump’s fights with Gold Star families would otherwise be political suicide, but with the Republican Party still terrified of him and his supporters, they run for the hills when asked to comment on his stunning behavior.

I am certainly not alone who believe that Trump’s words and actions are downright scary. In a recent poll, one in three believe Trump’s mental health is poor.

Said former Florida Gov. Jeb Bush during the 2016 GOP presidential primaries: “I’m not a psychiatrist or a psychologist, but the guy needs therapy.”

In addition, a new book has recently been published titled “The Dangerous Case of Donald Trump: 27 Psychiatrists and Mental Health Experts Assess a President.”  While the authors cannot provide a diagnosis without an examination of the President, they write we should all be concerned about Donald Trump’s mental health.

Some have referred to Trump’s narcissism as pathological.  “Pathological narcissism begins,” clinical psychologist Craig Malkin  writes, “when people become so addicted to feeling special that, just like with any drug, they’ll do anything to get their ‘high,’ including lie, steal, cheat, betray and even hurt those closest to them.”  #hocopolitics

Pathological narcissists feel entitled to whatever they want and have “empathy-impairment.” (That certainly came into play during the needless, recent skirmish with a Gold Star widow,) They often are emotionally volatile and employ “gaslighting” to create their desired reality.

Malkin adds: “When they can’t let go of their need to be admired or recognized, they have to bend or invent a reality in which they remain special despite all messages to the contrary. In point of fact, they become dangerously psychotic. It’s just not always obvious until it’s too late.”

My own belief is that this characterization seems applicable when, for example, Trump was not joking when he mused that then FBI Director James Comey was getting more attention than him.

So what if the President has some form of mental illness?  If backed against a wall, what would Trump do? Does anybody actually believe he would sit quietly if there was a 25th Amendment action taken against him or in the event of impeachment proceedings?  His threatened refusal to accept the election results had he lost provides a clue.

We’re a long way from that happening if it ever does, but frankly I’m scared.  Recall how he famously asked why do we have nuclear weapons if we can't use them?  He has access to the nuclear codes, whereby a strike cannot be vetoed or overruled by any party.  Congress knows that.

Will they be willing to take the chance even if the evidence against him on obstruction of justice charges is compelling or even proven collusion with the Russian government to alter the election?

I’m afraid not.  Trump’s dubious mental health provides him with the necessary insurance.
Posted by Steve Charing at 5:34 PM

At least with Trump we know what's going on. I really don't want a Pence Presidency.