Trump is Winning at Flag Football

While millions of people in Puerto Rico were beginning to reckon with the demolition of that beautiful island at the ferocious hands of Hurricane Maria, President Donald Trump was using his tiny grabby hands for other reasons.  #hocopolitics

Instead of responding with leadership to assure U.S. citizens there are at the very least receiving basic essentials, the President decided to go to his refuge—Twitter—and deflect again from a string of losses to create an issue of NFL players kneeling during the National Anthem at the games played last weekend.

Instead of calling the Mayor of San Juan Carmen Yulín Cruz four times during the week to determine the immediate needs of those victimized citizens, he called Dallas Cowboys owner and his friend Jerry Jones four times to insist that his players stand for the National Anthem.

When he eventually tweeted about Puerto Rico, he did so with the pettiness, narcissism and immaturity that have characterized his presidency so far: blaming others for missteps, taking credit for things he did not accomplish, exaggerating his abilities, and disclosing that Puerto Rico is an island in a very big ocean.

This pathetic, callous and rather un-American response is appearing as his own Katrina albatross and would add to another hard-to-swallow loss.  However, if he was ever looking for a win to stem this descent, the football angle appears to be what his doctor ordered.

Last year, San Francisco 49ers quarterback Colin Kaepernick took it upon himself to protest the all-too-frequent occurrence of police officers gunning down unarmed African-American men and wind up getting away with it.  These incidents have unquestionably been a stain on our society and Kaepernick, a black man, felt compelled to “take a knee” during the national Anthem prior to games last year.  He was booed mercilessly by fans and excoriated on social media with few of his peers demonstrating support.

Kaepernick was eventually let go by the 49ers and has yet to find a new team despite the fact he is better at this position than some of the current starting QBs and clearly better than many of the backups.  He is still awaiting that call.

So Trump lambasted players for not standing during the Anthem and told owners to fire those protesting players because they are disrespectful to the flag.  In a rebuke to Trump last weekend, teams around the NFL  joined in the protests, and it took different forms—kneeling, joining locked arms, remaining in the locker room while the Anthems were played.

Seizing the opportunity to demagogue and to deflect from his troubles, Trump took to Twitter and blasted the protesters.  He cast the kneelings as a disgrace and an affront to the flag, the Anthem, the military and our country.  He and his supporters maintained that our servicemen and women fought and died in combat to defend our flag and Anthem.

To be clear, we have never gone to war, never shot a bullet, or never bombed a target to protect our flag or the National Anthem.  Nobody died in defense of these symbols. In fact, our troops have always defended our Constitution, which includes Freedom of Speech and the right to protest peacefully. This is hyperbole at its worse, using the casualties of our military conflicts as props in a cynical political effort to feed  red meat to the frothing-at-the-mouth base.

As an aside, Trump has no standing as far as military appropriateness is concerned regardless of his title as Commander-in-Chief.  He dodged the draft on five occasions, took on a Gold Star family for political gain, and is clueless as to the meaning of the Purple Heart.

Nonetheless, Trump turned this legitimate protest into a question of patriotism and what he did what he does best, divide the country on race.  He riled up his mostly white base so that they have adopted his logic and has couched these protests as nothing short of treason. 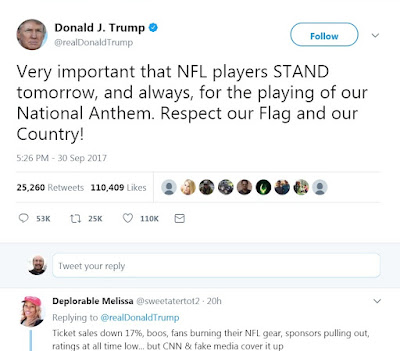 To a large extent, it has worked.
Fans burned various teams' jerseys, caps and what-not. They threatened to cancel season ticket subscriptions.   (Note that most if not all of those anti-protesters don't stand for the National Anthem in their living rooms regardless of the sport, but who cares about hypocrisy?)  The anti-protesters grabbed the momentum and seem to be winning the argument.

Accordingly, NFL games this week saw less players taking a knee during the Anthem than last week. When players knelt to pray for kindness and equality in our country prior to the National Anthem, fans at Baltimore’s M&T Bank Stadium booed vociferously even though the public address announcer explained what they were doing. Then the players rose when the Anthem began.

So uptight about the week-long debate was Ravens’ management and sensitive about being labeled anti-military, they included every military trapping they could muster before the game including a flyover by military aircraft.  I was surprised not to see members of the 101st Airborne Division parachuting to mid-field for the coin toss.

“It’s not about the ... flag,” Randy Lynn, an accountant from Baltimore who said he served seven years in the Army, told the Baltimore Sun. “It’s about killing black people.”

“It’s not against the flag. It’s against the injustice that the police are killing unarmed black people and getting away with it.”

But others disagree and see the protests as disrespecting our national symbols and country.  Trump pounced on this controversy to once again stoke divisions while the people of Puerto Rico stand in lengthy lines in oppressive heat for food, water, fuel and access to cash.

We see where the President’s priorities lie.
_____

UPDATE: The clock ran out and apparently Trump won this game.  Here is an explanation in Politico.
Posted by Steve Charing at 10:12 PM