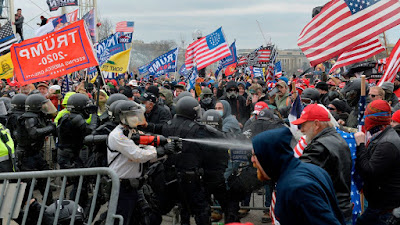 Thank Goodness for Barack Obama’s “Hope and Change” slogan in 2008! Other than that, I cannot think of a consistent, punchy, winning message over the past few decades that Democrats came up with. Even Joe Biden’s “Restore the Soul of America” message was poetic, but I doubt it had any impact on the 2020 race.

To be clear, effective messaging doesn’t need to be limited to a slogan or bumper sticker.  But it seems that every time a slogan or a comment is put forth by a Democrat, Republicans pounce on it.

Look how “Defund the Police,” “Medicare for All,” and ‘Green New Deal” were used as weapons against congressional Democratic candidates in 2020. Data are inconclusive as to the impact they had on those races but anecdotally, some politicians claim they had an effect.

Look how the George Floyd murder protests, which were mostly peaceful, were allowed to be manipulated by Republicans to shift the message from needed police reform to the destruction of buildings and even cities. It was a classic case of “Whataboutism.”

The most recent example is Rep. Maxine Waters’ comments regarding the Derek Chauvin trial and what should happen (confrontation) if the verdict is not favorable. The GQP took it and ran with it, and a censure action by Minority Leader Kevin McCarthy had been organized though tabled.

Did the Democrats attempt to censure Marjorie Taylor Greene for her heinous comments or those Republican congressmen who have perpetuated Trump’s big lie on the 2020 election outcome? No. Or even those congressmen who spoke at Trump’s rally that incited the insurrection on January 6? Crickets.

It wasn’t that long ago when Republicans bludgeoned the Democrats for being soft on terrorism. In fact, the 2004 election cycle featured that mantra.  Is it asking a lot for Democrats to turn the tables on Republicans during the 2022 cycle by pointing out THEIR softness on domestic terrorism and white nationalism?

Even the establishment of a 9/11-style commission to look into the events surrounding January 6 can’t get any traction. Why aren’t Democrats beating the Republicans over the head with January 6? Yet, the Republicans Benghazi-ed the Democrats to death when they saw an opportunity.

We cannot ever forget what happened January 6, and we should not allow the Republicans to escape the linkage between the atrocities of that event, Donald Trump and those Republicans who voted to acquit the former president in the impeachment trial when he so clearly incited the attack.

The Democrats do not need a catchy slogan to inculcate this matter into the conversation during the 2022 cycle. Footage will do just nicely. Those horrific images of Trump flag-carrying thugs breaching our Capitol should be a staple in every Democratic ad against those Republicans who are apparently soft on insurrections. Pictures do speak louder than words.

Posted by Steve Charing at 3:09 PM