Landing the Bad Boy: A Review of ‘I Alone Can Fix It’ 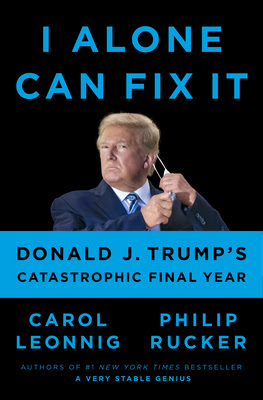 The year 2020 will be remembered for three major events: the COVID-19 pandemic, the murder of George Floyd that sparked protests and unrest, and the general election.

Globally the pandemic was and continues to be an insidious health crisis resulting in millions of lives lost. In addition, the U.S. confronted once again the quest for racial justice with a demand for reform in how the police interact with people of color. And the lead-up to the 2020 presidential election, the election itself and the tumultuous aftermath placed the United States at the precipice of losing its democratic traditions and democracy itself.

At the heart of these events, President Donald Trump played a key and massive role in how the country would respond to the first two crises and how he literally created the third one.  All were dangerous.

In their book, I Alone Can Fix It: Donald J. Trump’s Catastrophic Final Year, Pulitzer Prize winning reporters from the Washington Post Carol Leonnig and Phillip Rucker present a chilling and at times horrifying account of how President Trump mishandled, exacerbated or created these crises. The title is derived from a statement President-elect Trump gave at the Republican National Convention in 2016 whereby he told his faithful that nobody knows the system better than he does, and, therefore, “I alone can fix it.”

In their previous best seller in 2020, the authors used another well-known Trump phrase, “A Very Stable Genius” as their title. Should they pen additional books about this presidency, there is a plethora of Trump phrases to draw from.

Speaking of lifting phrases, I used the title of this review from a chapter title “Landing the Bad Boy” later in the book.  Referring to the drama, frayed nerves and mounting fears leading up to the 2021 inauguration and the determination to have a peaceful transition of power, one senior official was quoted in the book as saying, “We’ve got an aircraft, our landing gear is stuck, we’ve got one engine, and we’re out of fuel. We’ve got to land this bad boy.”

Keeping to a chronological format, Ms. Leonnig and Mr. Rucker present the behind-the-scenes machinations of the Trump administration as it courses through its fourth year beginning with the advent of the COVID-19 pandemic through the inauguration of Joe Biden.

While many of us have witnessed Trump’s behavior and character flaws in real time through his tweets, press briefings, appearances on Fox News and other platforms and have read previous accounts of his presidency and personality in other books, I Alone Can Fix It offers a chronicle that stems not from a single person or a few persons but dozens of eyewitnesses to history being made before their very eyes (and ears).

The authors gleaned from hundreds of hours of interviews with more than 140 sources including those at the highest levels of the Trump administration. Various sources spoke on the record while others spoke candidly on the condition of anonymity as the authors note, “to share private accounts of moments that profoundly challenged or shook them, to protect future careers, or to fend off retaliation from Trump or his allies.” Some of the information stemmed from the authors' own reporting for the Washington Post as well as that of other journalists.

And as Pulitzer Prize journalists do as a matter of routine, they fact-checked and verified the accounts from their sources. There are scores of referenced notes to back up the accounts. In other words, what is portrayed in I Alone Can Fix It is extremely credible. The authors do not offer their own opinions; they present these accounts often from people with direct knowledge of the situation.

Throughout the book, Trump’s well-documented personality defects are exposed, again not by the authors themselves but by the subjects of their interviews. His ever-frequent demonstrations of victimhood, grievance, oversized ego, narcissism, inability to tell the truth, lack of empathy and revenge supplement the narrative. Trump’s transactional nature is his state of nature. He saw the COVID crisis as more of a threat to his re-election than the public health crisis it truly is. Everything, and I mean everything, was seen through the lens of his political fortunes.

The book highlights Trump’s interactions with his underlings and advisors, such as Chief of Staff Mark Meadows and Chairman of the Joint Chiefs Mark Milley. He had strained relationships with Dr. Deborah Birx, Dr. Anthony Fauci and Alex Azar among others on the pandemic front. They didn’t buy into Trump’s happy talk about the virus magically disappearing. However, the book contains praise for Trump on pushing for the accelerated manufacturing of a vaccine while there were scathing condemnations on everything else related to the president’s handling of the pandemic.

Trump’s relationship with AG William Barr was solid until Barr refused to relent on Trump’s demands to send federal troops to respond to Black Lives Matter protesters. And it worsened when Barr would not pressure certain states to review the results of their elections. Despite a fawning, disgraceful ass-kiss of a resignation letter to Trump, Barr was on the outs.

The same could be said for the four years of servitude and sychophancy by Vice President Mike Pence. His refusal to reject the certification of the Electoral College tallies led to a chilly end to their relationship. During the siege on January 6, Trump never inquired about the safety of Pence after he attacked him on Twitter during the insurrection.

The dynamics between Milley and Trump were almost a core part of the book. Milley was determined to not permit the military to be deployed to quell civil unrest and was adamant about not allowing the military to be involved in the electoral process. This back and forth between the two and the thought processes between Milley and Defense Secretary Mark Esper and other trusted individuals were among the most revealing episodes contained the book.

They were also concerned Trump would try to launch a war against Iran in his final days.

The portions of I Alone Can Fix It relating to the election are particularly poignant. The drama unfolding on election night is described in vivid detail. Trump’s refusal to accept the results, promulgating “the big lie” that the election was stolen, and his futile battles in dozens of courts led by the hapless Rudy Giuliani held your attention.

And the authors’ account of the harrowing experience of the January 6 insurrection and that critical period between that assault on our Capitol and the inauguration is loaded with palpable tension and hand-trembling fear. Even though we all witnessed it and will continue to see what transpired, the book effectively conveys the horrors of the event, the incitement of the riot based on that big lie, and how close democracy in the U.SA was in peril.

I Alone Can Fix It: Donald J. Trump’s Catastrophic Final Year is an extraordinary work for the ages. History will find that this book accurately chronicled this last nerve-wracking year of this nerve-wracking Trump presidency.

It's a fast read and a must read.