If the producers and creative team of The Prom wanted to find a setting for homophobia in small town America, they found the right place in Edgewater, Indiana—that’s Mike Pence’s Indiana in case you forgot. And if they wanted to poke fun at Broadway performers and divas, they hit the mark with The Prom currently on its first national tour and making a brief stop at Baltimore’s Hippodrome Theater.

Directed and choreographed by Tony Award winner Casey Nicholaw, The Prom is a dazzling, colorful, extremely well-staged production that adroitly combines romance and gay acceptance with comedy. It tugs at your heartstrings while offering up an abundance of laughs making this one of the funniest musicals I’ve ever seen.

The performances by the energetic and talented cast are fabulous. Their vocals are magnificent as almost everybody has a turn to showcase those skills. Nicholaw’s potent choreography is executed to perfection by all, particularly the Ensemble in several amazing production numbers. One of these is the spectacular, get-on-your-feet show stopping finale “It’s Time to Dance.”

With music by Matthew Sklar, lyrics by Chad Beguelin and a book by Bob Martin and Beguelin, the 2018 musical is based on an original concept by Jack Viertel. Sklar’s score is melodic and lively, if not spectacular, and Beguelin’s lyrics are witty and tender.

A film adaptation produced and directed by Ryan Murphy (Glee) and featuring Meryl Streep, James Corden and Nicole Kidman among others, was released on Netflix in December 2020. Despite the high-powered cast, I prefer the stage version over the film, and the production at the Hippodrome supports that belief.

As I mentioned earlier, part of The Prom’s charm is that it is unafraid to lampoon Broadway performers and the industry as a whole. “Straight people like Broadway, too” is one of the many clever lines crafted by Martin and Beguelin that land a punch. They also do a number on Edgewater, Indiana. If this town had a Chamber of Commerce, I doubt they would buy a block of tickets to see The Prom.

"The performances by the energetic and talented cast are fabulous."

Four eccentric narcissistic Broadway has-beens seek to resurrect their flagging careers by gaining attention if they can latch on to a cause. They found one on social media of all places where Emma, a lesbian high school student in Edgewater, Indiana, was having trouble with the local PTA who opposed her attending the event with her girlfriend. As a result of the controversy, the scheduled prom was cancelled incurring the wrath of the other students that led to the bullying of Emma.

The performers—Dee Dee Allen, Barry Glickman, Trent Oliver and Angie Dickinson—burst into a PTA meeting with signs in support for the bewildered Emma and the stunned head of the PTA, Mrs. Greene. Unbeknownst to her, Emma’s closeted girlfriend is Mrs. Greene’s daughter Alyssa, a situation which provides much of the drama.

With the help of the school’s principal Mr. Hawkins, the Broadway do-gooders attempt to change the hearts and minds of the conservative townsfolk leading to a happy conclusion. The zaniness that ensues does not obliterate the serious issues of acceptance and inclusion, not to mention bullying, that form the core of the storyline. The ability to blend these concepts effectively is why The Prom is so entertaining and heartwarming.

Kaden Kearney shines brightly as the shy Emma. The chemistry with their girlfriend Alyssa (Kalyn West) is evident onstage with both demonstrating fine acting skills and melodic vocals. Kaden's standout performance with her mezzo-soprano voice is in “Just Breathe” after they was bullied by other students.  They also excels in the duets with Ms. West in “Dance with You” and “You Happened” and in the emotional “Unruly Heart” with the Ensemble.

The two actors who were slammed by critics for being too narcissistic following their performance in the fictional show “Eleanor” that kicks off The Prom are Barry Glickman (Patrick Wetzel) and Dee Dee Allen (Courtney Balan).  This shellacking in the press and the closing of “Eleanor” after just one performance motivate them to find a cause célèbre as a means of professional rehabilitation. These two generate the most laughs though there are plenty of others to enjoy.

Mr. Wetzel’s self-absorbed but kind-hearted Barry is filled with flamboyance and camp. “I’m as gay as a bucket of wigs,” he states. And for good measure, he emphatically declares he’s Jewish. A funny role in which he brings it home, Mr. Wetzel demonstrates his versatile acting abilities as he displays his paternal instincts by tenderly getting Emma ready for the prom while he admits he never had the opportunity himself to attend one. It’s a touching scene.

He excels in the moving “Barry is Going to Prom” and does a great job in the first act finale “Tonight Belongs to You.” This is an outstanding high-octane production number that displays the exceptional dancing abilities by the cast and Mr. Nicholaw’s meticulous choreography. (A special nod goes to Ensemble member Braden Allen King for his well-executed two handsprings in which he gracefully flipped across the width of the stage.)

Then there is Ms. Balan’s hilarious portrayal of Dee Dee. There was no shortage of lines that try to convince anyone who’s listening, especially herself, that whatever she does, it’s for others, not just for Dee Dee. This is exemplified in the solo “The Lady’s Improving.” She plays the diva role to the hilt and delights with her facial expressions and body language in addition to her words.

Another pretentious actor making the trip to Indiana is Trent Oliver played very well by Bud Weber. Trent is Julliard-trained and makes sure everyone, and I mean everyone, is aware of it. He is currently on a non-equity tour with the cast of Godspell. That must have helped his understanding of Christianity as Trent performs my favorite number in the show, “Love Thy Neighbor.” That song is intended to convince the Edgewater students that the Bible contains many principles in which they are violating, such as tattoos or pre-marital sex in response to their condemnation of homosexuality.

Emily Borromeo plays Angie as the fourth Broadway performer making the trip. Her role is not as dominant as the other three actors on the mission, but Ms. Borromeo’s rendition of “Zazz” with Ms. Kearney’s Emma is one of the show’s highlights. In that song, she explains jazz to Emma and her memories of Bob Fosse while she had performed in Chicago. Ms. Borromeo’s vocals and silky smooth dance moves are superb.

As the principal Mr. Hawkins, Sinclair Mitchell effectively provides the lone support for Emma’s quest to attend the prom until the Broadway actors plus an agent (Sheldon Saperstein played by Shavey Brown) swing into town. Mr. Mitchell’s acting props are evident as he displays his empathy for Emma.

The principal happens to be a fan of Dee Dee and they grow close from their dinner dates at Applebee’s only to realize that Dee Dee is in it for herself. She won him back with “The Lady’s Improving.” Mr. Mitchell also excels in his solo “We Look to You.”

Much of the drama in The Prom stems from Mrs. Greene, the PTA president and mother of Alyssa. Played proficiently by Ashanti J’Aria, Mrs. Greene is a tough, controlling mother who, like most conservative small town residents, is not a fan of homosexuality. For that reason, Alyssa had such difficulty coming out—until the end.

Aside from the splendid direction and choreography by Casey Nicholaw, the rest of the technical crew has done an outstanding job in making The Prom a sparkling spectacle. Conductor Chris Gurr and the orchestra deliver Mr. Skkar’s score beautifully and support the musical numbers effectively without overwhelming the vocals.

Scott Pask’s scenic design enhances the visual enjoyment. Scene changes are made swiftly mainly through the use of revolving backdrops that transform settings from the school corridor to the gym to a motel room to a bedroom to an Applebee’s and other venues.

Natasha Katz’s bright and colorful lighting design also adds to the visuals as do the costumes designed by Ann Roth and Matthew Pachtman.

The story of a young lesbian’s quest for love and acceptance is of paramount importance. The laugh lines and the comedic characters lighten the mood, but the main theme must not be overlooked.

It should be noted that the inspiration for the musical originated not from any circumstance in Indiana but from a real-life controversy that occurred in Itawamba Agricultural High School in Fulton, Mississippi in 2010.

The Prom was nominated for seven Tony Awards in 2019 but had the bad luck of going head-to-head against Hadestown. The Prom did, however, win the Drama Desk Award for Best Musical.

With excellent music, an important storyline and a brilliantly staged musical featuring a talented cast, you should get your dancing shoes on and be taken to The Prom. It will be a night to remember. 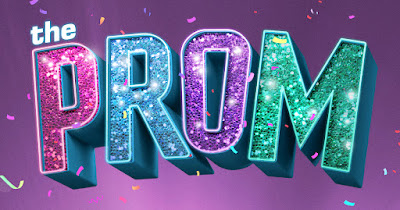 UPDATE:
BECAUSE OF COVID AFFECTING MEMBERS WITHIN THE COMPANY, ALL PERFORMANCES FROM JANUARY 21 THROUGH JANUARY 23 AT THE HIPPODROME HAVE BEEN CANCELLED. THE THEATRE PLANS TO RESCHEDULE. IF YOU HAVE TICKETS, PLEASE HOLD ON TO THEM.
Posted by Steve Charing at 2:44 PM

I love watching the prom