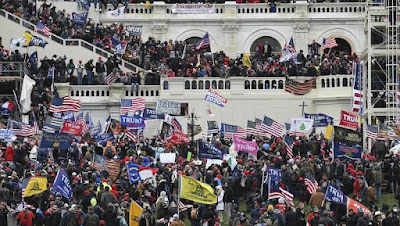 Immediately following the catastrophic attacks on September 11, 2001, the country rallied behind President George W. Bush. Perhaps for the final time, the U.S. was united behind a cause. Anyone who was not all-in was accused of not loving America and siding with the terrorists.

In 2004, Bush ran on and won re-election primarily on stoking fears of terrorism and relentlessly pointing back to 9/11. That fateful day continued to be invoked even during the 2008 presidential primaries when then candidate Joe Biden characterized a Republican hopeful, the former “America’s Mayor” Rudy Giuliani, as saying nothing more than a subject, a verb and 9/11.

Some 20 years later, another form of terrorism struck the U.S. but this time it was domestic terrorism.  On January 6, 2021, American democracy was attacked. The terrorists were not brown-skinned foreign Muslims who hijacked four planes and killed thousands of people including first responders. Instead, they were mostly white supremacists and violent extremists, key components of the former and defeated president Donald Trump’s base.

Thousands were frothing from the words of Trump and other incendiary speakers on the Ellipse before the U.S. Capitol was stormed, desecrated and under siege while lawmakers were attempting to carry out their constitutional duty of certifying the election that was held in November.

Perpetuating the big lie, which he continues to this day that somehow the election was stolen from him, he egged on the supposedly peaceful assembly who happened to carry police shields, bats, bear spray, flag poles and other weapons just for kicks, to march to the Capitol.

“We fight like hell. And if you don’t fight like hell, you’re not going to have a country anymore,” Trump said. His obvious incitement of the riot earned him a record-setting second impeachment with the most votes to convict ever. But it was not enough to meet the high bar in the Constitution.

At least five died during the riot and insurrection that ensued with hundreds injured or psychologically damaged. Our Capitol, the citadel of democracy, was defaced, shattered and turned into a public toilet. Hundreds sought out lawmakers to do God knows what. Had it not been for the bravery of the undermanned Capitol Police a whole different storyline would have been written. Democracy prevailed that day and night, but only by a hair. 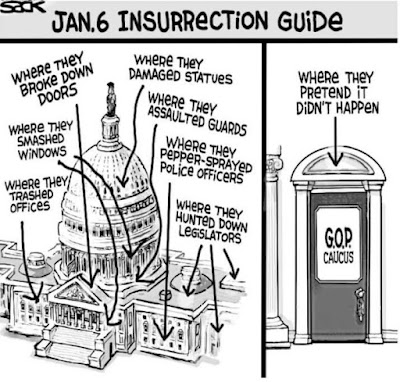 But as the black eye on democracy marked its one-year anniversary, it is clear Republicans don’t seem or want to acknowledge the seriousness of the event. Over the course of the year, attempts were made to whitewash it, create conspiracy theories that the FBI or antifa were behind it, the rioters were patriots or even tourists.

Lindsey Graham who had decried Trump’s role in the riots the night of the horror show, now feels the Democrats are politicizing the event. (Remember 9/11, Lindsey, when Bush and later your buddy McCain made hay over that day.) Mitch McConnell did the same thing.

The cowardly Kevin McCarthy after assigning responsibility for the riots to Trump went down to Mar-a-Lago to beg for forgiveness in an attempt not to resurrect Trump’s career, but his own.

Equally spineless Marco Rubio claimed that the Democrats are trying to portray all Republicans as insurrectionists. Yet, he accuses Democrats of being looters.

Other than Liz Cheney (and her father), no other Republican representatives took part for a moment of silence in the Capitol to commemorate the somber day. Nor did they show up for a prayer vigil later.

Republicans are clearly in denial. They are fully aware that by being tethered to Trump and his biggest of all lies, this could have political fallout as the next cycle begins. Images of the insurrection will or should play in all political ads not to blame Republicans for January 6 but to blame their enabling of Trump, failing to convict him in the face of overwhelming evidence, supporting the big lie, denying the significance of 1/6, refusing to certify the election and attempting to suppress the vote in future elections.

January 6 was not a good look for the GOP. They know it and are doing the darndest to minimize it. Even Ted Cruz was forced to publicly and pathetically apologize to Tucker Carlson, of all people, for having a brief and rare truthful moment when he characterized January 6 as a “violent terrorist attack.”

And never mind their opposition to a bipartisan commission and their minimizing the role of the House Select committee.

President Biden delivered a powerful speech calling out Trump for his role in the insurrection. Finally, he put the illusion of bipartisanship to rest and swung hard. It was most needed and overdue.

Republicans are still living in fear of Trump and his base. Our country was the victim of domestic terrorism, and the Trump loyalists can’t bring themselves to admit it.

Imagine how they would have reacted if Democrats minimized or shrugged off 9/11 in the same manner. 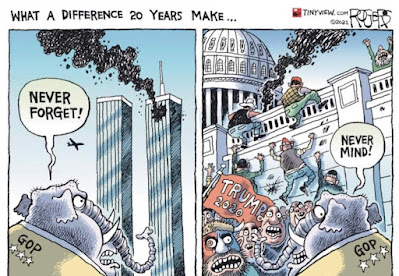 Posted by Steve Charing at 1:59 PM