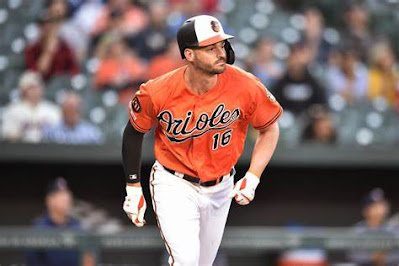 Well, lookie here! The Baltimore Orioles, baseball’s perennial doormats for the past five years, find themselves in the midst of a Wild Card chase. As of July 13, the team is carrying a 10-game winning streak—the longest such success since Bill Clinton was president—into St. Petersburg to face the Ray's prior to the All-Star break.

They are now one game over .500 following a string of seasons whereby they lost well over 100 games each.

While the fan base in Baltimore is experiencing a renewed sense of joy, the enthusiasm has been tempered by the rumors that their stalwart leader, Trey Mancini, may be on the block at the trading deadline come early August. He’s a free agent after this year, and the Orioles, still reeling from the devastating Chris Davis contract extension under previous management, has been loath to sign players long term at a steep price.

The O’s current management spearheaded by GM Mike Elias needs to put the notion of trading Mancini deep in their back pocket and find other ways to strengthen the franchise.

Mancini is a true leader in the clubhouse and revered by his teammates like no other. At age 30 and the longest tenured Oriole, younger Birds flock to him for advice and mentorship. A loss could disrupt the strong chemistry the team is enjoying for the first time in quite a while.

More importantly, trading Mancini would deal a major blow to the fan base, which has finally seen a light at the end of the tunnel with their beloved team. He is arguably the most popular Oriole and for good reason.

In 2020 Mancini announced he was diagnosed with Stage 3 colon cancer and accordingly missed that Covid-truncated season following surgery and six months of chemotherapy treatments.

He returned to the Orioles’ lineup in 2021 and was a big run producer. He appeared in the All Star Game’s Homerun Derby, though not named to the all-star team, and fought his way to battle the incomparable Mets slugger Pete Alonso in the final round only to come in second.

I would have preferred to see Mancini take the mic at the All Star game the next night at Denver’s Coors Field to introduce MLB’s traditional Stand Up to Cancer moment.

“Good evening. I am Trey Mancini of the Baltimore Orioles, and I fought cancer and I won.” How inspirational would that have been! It would have been a moment for the ages, drenched in emotion, but alas, it did not happen.

Appropriately, Mancini captured the American League Comeback Player of the Year Award in 2021 and is performing at a high level in 2022 leading the team in batting average.

Attendance at Orioles games has been below par to say the least over these past few years. They seem to draw only when articles of clothing are given out, such as floppy hats and Hawaiian shirts. I do believe that attendance will increase markedly should the team continue their strong play and compete for a playoff spot.

Trading Trey Mancini will not further that end—in the clubhouse, on the field and in the stands. Let’s see what happens after the season. Perhaps, Mancini will sign with the O’s at a hometown discount. Maybe not. But let’s not destroy the renewed good vibes from yesteryear and allow the season play out.

NOTE: This post is has been updated to reflect the Orioles' winning streak, which stands at 10.

Posted by Steve Charing at 5:25 PM