The Case for Prosecution 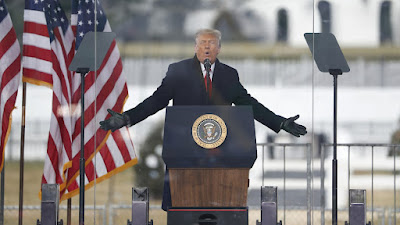 As the January 6 Select Committee continues to unveil through witnesses and documents more evidence that former President Donald Trump may have committed punishable crimes, the question becomes not will he be prosecuted but should he.

To be sure, there is a cornucopia of possible crimes committed by Trump from inciting a riot, to seditious conspiracy to witness tampering and a whole bunch in between. The panel has been so effective in bringing these indiscretions and possible crimes to the surface that three in five Americans believe Trump should be prosecuted. And that is before Cassidy Hutchinson’s explosive testimony given to the Select Committee and to the viewing public on June 28.

Since I am not a lawyer, I will gladly yield the floor to the legal experts who can debate whether Trump has committed crimes that could lead to an indictment. They can argue whether or not the evidence is sufficient to prove a federal case beyond a reasonable doubt. But if the evidence exists and is compelling enough to take it to a grand jury, then yes, the Department of Justice should proceed and prosecute even though a conviction would be improbable.

In advocating against a potential prosecution of Trump, several conservative columnists have summoned up President Gerald Ford’s pardoning of disgraced Richard Nixon prior to a likely indictment as a means to heal the county. He took this action in an effort to put the Watergate episode behind us, and as a result, he damaged himself politically.

Though Nixon’s lying to cover up a botched burglary of Democratic headquarters at the Watergate was and remains a national stain, it does not even come close to the severity of conspiring to execute a coup in an attempt to overturn a lawful election. Moreover, the country was not nearly as divided it is today making it easier to heal.

Following Trump’s “fight like hell” command at his infamous rally at the Ellipse, he knowingly dispatched armed insurrectionists to the People’s House. Seven people lost their lives directly or indirectly with hundreds of police officers injured, many seriously on that fateful day. Millions of dollars of property damage resulted, and the Capitol was so violated and defaced, the riot seen all over the globe became a national embarrassment.

The healing concept offered by opponents of prosecuting Trump is intriguing, but it is one-sided. Prominent Republicans vowed to go on a revenge tour should they reclaim both chambers of Congress regardless of whether or not Trump is indicted.

They have already tipped their hand when senators Ted Cruz, Marco Rubio and Lindsey Graham—all of whom were personally humiliated by Trump during the 2016 primaries and have become pathetic Trump sycophants—support impeachment proceedings concerning President Biden.  House Republicans promise endless investigations, and, of course, private citizen Hunter Biden, the boogeyman of the MAGA crowd, will be front and center.  Never mind their likely push to roll back hard-fought rights at the federal and state levels that may include dismantling popular entitlement programs will be on the agenda. That’s not healing.

Declining to prosecute Trump for provable crimes will not heal the country, especially if the blood-thirsty vengeful Republicans are in charge. In fact, not punishing someone who was and continues to be a stake through the heart of our democracy and the rule of law will be a tragic mistake and something our nation will not recover from for many years. Without setting an example, this blot on our history could repeat itself.

What good is healing if we do not have accountability, a democracy or rule of law?

Posted by Steve Charing at 9:49 PM