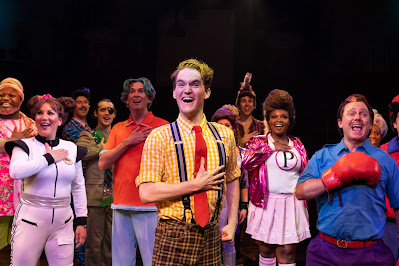 When I reviewed The Little Mermaid at Columbia’s Toby’s Dinner Theatre some four years ago, I promised I would avoid the temptation of flooding the review with fish puns. Alas, I couldn’t help myself and caved.

With The SpongeBob Musical now playing at Toby’s, I promise once again not to bring to the surface any fish jokes or puns although the show is set at the bottom of the sea. The names of the characters do the job for me: Sheldon Plankton, Squidward Q. Tentacles, Perch Perkins, Mr. Krabs, Larry the Lobster, SpongeBob—you get the picture.

The SpongeBob Musical is an adaptation of Nickelodeon’s long-running animated children’s sitcom of the same name created by Stephen Hillenberg. It features a book by Kyle Jarrow, with an eclectic array of original songs by Yolanda Adams, Steven Tyler and Joe Perry of Aerosmith, Sara Bareilles, Jonathan Coulton, Alexander Ebert of Edward Sharpe & The Magnetic Zeros, The Flaming Lips, Lady A, Cyndi Lauper, John Legend, Panic! At the Disco, Plain White T’s, They Might Be Giants and T.I., and songs by David Bowie, Tom Kenny and Andy Paley. Each song in the musical is composed by a different artist.

Additional lyrics are by Jonathan Coulton, with additional music by Tom Kitt. The musical production was conceived by Tina Landau and received 12 Tony Award nominations in 2018 including Best Musical.

The SpongeBob Musical at Toby’s is an eye-pleasing, fantasy romp that both children and adults will enjoy. Helen Hayes Award winning Mark Minnick gives a master class in directing as the energetic cast is placed in perpetual motion throughout with impeccable timing, pace and staging. Mr. Minnick and choreographer David Singleton utilize every inch of the in-the-round stage and then some as the performers also find their way on the steps around the stage and the balcony.

The SpongeBob Musical is set in a town beneath the sea called Bikini Bottom—the name of Toby’s specialty beverage for the duration of the run. Lighting Director David A. Hopkins maintains an aqua blue quality throughout most of the production depicting the underwater environment.

"The SpongeBob Musical at Toby’s is an eye-pleasing, fantasy romp that both children and adults will enjoy."

Scenic/Properties Designer Shane Lowry allowed his imagination and creativity to take over with an expansive assortment of thematic decorations and props. He used recyclable items that typically wind up in the bottom of the ocean as trash to make an important point about the environment. (See Mr. Lowry’s statement at the conclusion of this review.)

Despite the underwater setting, rest assured the creative team and management has made every effort to keep the patrons and Toby’s delicious buffet dry throughout. There is no need to bring a snorkel.

The musical calls upon the audience to imagine this undersea town and the goofy characters that inhabit it. Dispense with logic for a couple of hours as it would otherwise be difficult to conceive how a squirrel named Sandy Cheeks with scientific expertise and possessing the magical voice of Janine Sunday who plays her could survive underwater. Or how the residents of Bikini Bottom could welcome a sunrise while being so deep beneath the sea. But this is make believe, and in Bikini Bottom, anything goes.

The story centers on an impending volcanic eruption from nearby Mt. Humongous that threatens to decimate the town and its colorful inhabitants within 48 hours. A perennially cheerful and optimistic sea sponge named SpongeBob (played magnificently by Kyle Dalsimer) sets out to save the town and prove he is not “just a simple sponge” as he was accused of being by miserly Eugene Krabs (Jeffrey Shankle), manager of the Krusty Krab restaurant.

With his BFF Patrick Star (DeCarlo Raspberry) and his friend, the aforementioned Sandy Cheeks (Janine Sunday) in tow, SpongeBob attempts to climb Mt. Humongous to intervene and prevent the seemingly inevitable eruption. They endeavor to overcome their own lack of self-esteem and confidence as well as a pair of antagonists, Sheldon Plankton (Joey Ellinghaus) and Karen the Computer (Amanda Kaplan) who want to thwart the effort. In the rather predictable conclusion, all works out despite the obstacles.

Making his Toby’s debut, charismatic Kyle Dalsimer brings tons of youthful exuberance and athletic agility to the title role. A triple threat for sure, Mr. Dalsimer has a wonderful tenor voice and demonstrates his ability to hold long notes. He is called upon to perform in many of the show’s songs with other members of the cast and stands out in the solos “Bikini Bottom Day” and “Simple Sponge.” He also is excellent in the snappy group number “Best Day Ever.”

In an exhaustingly physical role, Mr. Dalsimer moves about the stage with grace and power like he has wings on his feet while his acting skills shine in portraying the sunny, happy-go-lucky character.

As SpongeBob’s best friend Patrick Star, Helen Hayes Award winner DeCarlo Raspberry brings his own set of talents to the fore. He is also a top-notch vocalist as evident in the duet “BFF” and the outstanding group number “Super Sea-Star Savior” with a group of sardines, no less, which has a revival feel.

Patrick, a starfish, is kind of dim-witted. Yet, some of the Bikini Bottom residents including those sardines clad in shiny costumes think he’s a genius and made him a guru of some sort, which threatened the BFF status with SpongeBob. Spoiler alert: they do reconcile and join forces to conquer Mt. Humongous. Mr. Raspberry portrays that comedic character adroitly.

As the denigrated scientist-squirrel Sandy Cheeks, Janine Sunday is wonderful. Her lovely singing voice is always a joy, and she excels in “Hero Is My Middle Name” with Mr. Dalsimer and Mr. Raspberry and the duet “Chop To The Top” with Mr. Dalsimer.

Making a welcome return to Toby’s is Helen Hayes nominee Darren McDonnell as the 4-legged octopus (yes, there are 4 legs) Squidward Q. Tentacles—my favorite name in the show. Constantly reminded of being a loser, Squidward is determined to overcome the label.

Mr. McDonnell performs very well with the song “I’m Not A Loser” in a superb tap-dancing number with the ensemble. Tap dancing is quite a skill to possess; dancing with 4 legs is definitely a challenge and Mr. McDonnell pulls it off. In addition, his facial expressions and demeanor throughout are priceless.

The versatile Jeffrey Shankle plays greedy Eugene Krabs, the manager of the Krusty Krab, with flair. Mr. Shankle performs well with Jordyn Taylor who plays the role of Mr. Krabs’ daughter Pearl in the duet “Daddy Knows Best.” It is striking that he will not let go of Rocky’s boxing gloves from Toby’s previous production. 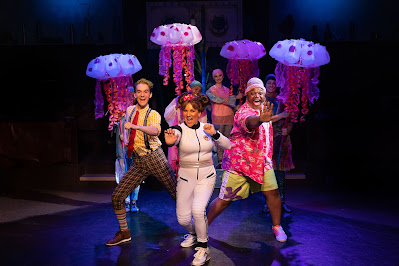 Other notable members of the extraordinary cast include excellent Joey Ellinghaus and Amanda Kaplan as the villains Sheldon Plankton and Karen the Computer, respectively;  Jordan Stockdale as the comedic Patchy the Pirate; Justin Calhoun as Perch Perkins who acts as a sort of narrator; Santina Maiolatesi as the Mayor of Bikini Bottom who loves to create myriad task forces to analyze problems; Crystal Freeman as Puff; Shane Lowry as Larry the Lobster in addition to his set design duties, David James as the hilarious Old Man Jenkins who demands that these creatures get off his lawn; Mr. Lowry joins Brandon Bedore and Quadry Brown as the roller skating act “The Electric Skates";  Michael Pantazis as French Narrator; and Alexis Krey, Ariel Messeca, and Patricia ‘Pep” Targete as part of the energetic ensemble.

Choreographer David Singleton adeptly put the cast through the paces with some very spirited and vigorous production numbers including “When The Going Gets Tough,” “I’m Not A Loser,” “SpongeBob Theme Song.”

Sound Designers John Pantazis and Nathan Scavilla do a fine job with the audio and inserting well-placed sound effects throughout.

And this show boasts simply spectacular costumes designed by Flo Arnold with contributions from Janine Sunday as well as Wig/Hair Designs by Jayson Kueberth. There are tons of brilliantly colorful and imaginative costumes that add much to the spectacle.

The SpongeBob Musical is a solid show throughout highlighted by an outstanding lead performer Kyle Dalsimer and an energetic talented cast and crew. Under Mark Minnick’s direction, the production moves smoothly and meticulously and brings all the elements together in a cohesive manner.

Adults will enjoy the quality of the entertainment, the music and the messaging contained therein; children will absolutely love it—hook, line and sinker. (Ugh! I knew I couldn’t hold out.)

The SpongeBob Musical runs through July 31 at Toby’s Dinner Theatre, 5900 Symphony Woods Road, Columbia, MD 21044.  Tickets may be purchased by calling the Box Office 410-730-8311 or visiting here as well as Ticketmaster.

There are close to 8 million metric tons of plastic trash that pollute our oceans each year, and it destroys thousands of aquatic ecosystems every day. If we continue to dump our trash into the sea, in the next 30 years there will be more trash than fish in the ocean.

This performances’ environment is made up of donations of: over110 milk jugs, 300 water bottles, 100 metal cans, 200 plastic containers, over 150 pool noodles and many other unwanted recyclable objects. Recycling isn’t always separating the metal from the plastic. In this case it is looking at things from another perspective and giving them a new life and purpose.

It has been an absolute joy to allow my inner child out and to create this unique playground that forces the inner imagination out of us. Special thanks to the cast, crew and staff at Toby’s for all their recycling donations!

To learn more about what you can do to save our oceans, visit here.

Posted by Steve Charing at 1:16 PM