Lobby Day Was Just the Beginning 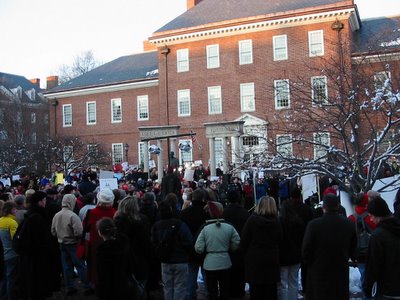 More lgbt involvement needed to achieve equality
By Steve Charing
Senior Political Analyst
Nearly a thousand lgbt folks and their supporters participated in a process that makes our democracy so great. One day removed from a massive snowstorm, these crusaders trekked to Annapolis on February 13 to be part of Equality Maryland’s third Lobby Day.

On a chilly afternoon, they attended a rally in Lawyer’s Mall, which is adjacent to the State House. The event featured several prominent speakers, including U.S. Senate candidate and former Congressman and President of the NAACP Kweisi Mfume. They also trudged through the slush-filled Annapolis sidewalks and streets to visit office buildings housing the state’s senators and delegates.

The crowd came prepared to denounce the attempts by many members of the state’s General Assembly for pushing a constitutional amendment that would ban same-sex marriage. These efforts came on the heels of the court ruling last month, which concluded the existing Maryland statute defining marriage as only between a man and a woman was unconstitutional. Baltimore Circuit Court Judge M. Brooke Murdock stayed the ruling pending appeal.

The hour-long rally was intended to stir the crowd and galvanize the efforts to persuade the local legislators in private meetings that a proposed constitutional amendment is unfair and a misuse of the document. A good line-up of speakers made brief presentations to the shivering rally-goers and members of the media in attendance.

Lisa Polyak spoke following introductory remarks by Equality Maryland’s executive director Dan Furmansky. She along with her partner Gita Deane were two of the nineteen plaintiffs in the lawsuit that has sparked the current debate.

Other speakers in support of lgbt equality ranged from a representative of the National Coalition of American Nuns/New Ways Ministry to the President of the Maryland State and District of Columbia AFL-CIO. But the main message was delivered by Kweisi Mfume, who invoked the memory of Coretta Scott King and her life-long struggle to achieve equality and human justice for all. Mr. Mfume related how at her memorial service people carried signs read, "Rest in Hell" to protest her actions for equal rights. He said we obviously still have a long way to go.

Mr. Mfume told the excited crowd that he opposes discrimination in any form and that there should be equality for all citizens. "Make room at the welcome table for everybody," he implored. While he stopped short of explicitly advocating at the rally same-sex marriage (clearly for political considerations), he vehemently opposes a constitutional amendment, which would prohibit it. "If legislators don’t want to expand rights, then they should come out and explain why," Mfume told the cheering throng.

After the rally, Mfume reiterated this message when he said to me, "Let me make this very clear: I oppose a constitutional amendment [banning same-sex marriage] at the federal or at the state level."

Mr. Mfume is a rare candidate for a major office to be up front about marriage equality. He recently told the Washington Blade he supports equal marriage rights for gay couples. "As someone who was raised to believe in traditional marriage, it does not mean others cannot have different beliefs. I recognize [civil union] laws don't cover all the benefits and all the rights that could and should be accrued to same sex couples," he said.

Before, during and following the rally, participants had dispersed to meet with their representatives that had been scheduled in advance. Some had small meetings and others were larger.
For example, Senator Schrader (R-Howard County) was stunned to see as many as 49 constituents from District 13 packing her office. This effort was led by the organizing and mobilization by PFLAG-Howard County. Several among us related their personal stories and conveyed their perspectives on how a constitutional amendment would be harmful to ourselves and families and why marriage equality is so important.

Following the presentations, Senator Schrader did not commit as to how she would vote if any of two current bills supporting an amendment find their way to the floor. Most observers are pessimistic that she would buck her GOP Party leadership by voting against it, but many of us came away from the meeting thinking that she would be somewhat bothered by having to toe the Party line. I believe we made a good impression.

Other delegations weren’t as successful, as several conservative legislators from District 5 in Carroll County stood up their constituents even though pre-arranged appointments were made, or they simply ducked them. These legislators are too closed-minded, and it is virtually impossible to change their homophobic views.

But we must still try.

We are finding out more and more that when legislators who are relatively unfamiliar with lgbt individuals and can actually put a human face on the prevailing issues as a result of meetings, there is a shift by varying degrees to their openness on these issues. Hearing our stories and concerns helps removes some barriers.

A sizable crowd at this event was essential to impress the legislators and the media. But a greater proportion of the participants came mainly from Maryland’s suburbs like Montgomery and Howard counties. The event’s organizers and other observers noted a disturbing low turnout from Baltimore City in general, especially the Mt. Vernon area. This validates an ongoing theory among gay activists that too many lgbt city residents are apathetic. I plan to examine this issue in a future column.

Even if you didn’t attend the rally and meetings, there is still an ample opportunity to make your voice heard. The proposed amendments are not going to protect marriage; they are homophobic and discriminatory. And you don’t have to be in a long-term relationship to be stung by this anti-gay legislation.

Please go to the Equality Maryland website at http://www.equalitymaryland.org/ and look up your district and your state senator and delegate(s). Call their offices, write them, e-mail them and let them know you are a citizen of this state, you pay your taxes, and you do not want discrimination written into the constitution. The bills you want them to oppose are House Bill 1393 and Senate Bill 690.

Call Governor Ehrlich, too. His number is 1-800-811-8336. He thinks the people are behind the amendment. Tell him that the constitutional amendment harms lgbt families and that he’s wrong for supporting it.

Do on the phone what the Howard County folks did with their Senator in person: overwhelm!
Posted by Steve Charing at 12:25 AM

I can't understand why the LGBT community is giving Kweisi Mfume a free pass for failing to support marriage. He keeps saying he opposes a constitutional amendment banning same sex marriage, but, as you point out in your story, "clearly for political considerations" he stops short of endorsing same-sex marriage.

We need to elect leaders who have the courage to do what's right -- regardless of the "political considerations." Senate candidates Lise Van Susteren and Allan Lichtman have publicly supported marriage. Mfume should also.

Thanks for your feedback. It is frustrating that all the major candidates are sidestepping the issue. They are so fearful of being demonized anti-family or pro-perversion. We're looking for REAL leaders who are secure.