The Upcoming Primaries: A Way to Get Our Voices Heard 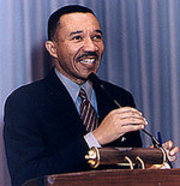 Rich Madaleno, an openly gay state Delegate (Montgomery County) now running for state Senate, told the Washington Blade, "I’m surprised [by] the number of gay people whose doors I knock on. I introduce myself as ‘The gay guy who’s been representing you for the last four years,’ and they’re like, ‘Really? Wow.’"

That is a sad commentary on the lack of interest in politics by a large segment of the lgbt community (as well as much of the general population). Too many are happy in their comfort zone of apathy and just enjoying their own little world. Madaleno’s "surprise" at the reaction of his gay constituents is, by itself, a revelation; he should have been more aware of the widespread apathy—an ongoing impediment to activism.

But for those of us who seek to make things better, if not for ourselves, but for the younger generation of lgbt people, engagement in the political process is key. And the upcoming primary elections on September 12 will afford us a good opportunity to make our voices heard.

Not only is it important to participate as a civic duty and to try to improve the plight of lgbt folks, but this year will feature as many as eight openly lgbt candidates for the Maryland General Assembly. Electing individuals friendly to our cause as well as their being strong on other weighty issues is vital to our drive for equality.

This 2006 election year brings significant statewide and local races. The primaries serve to winnow out candidates of the same party to determine who will be bumping heads in the general elections in November. Often, these primary elections feature multiple candidates from an individual party whose differences on policy may be scant or nuanced. Usually at the end, it boils down to personal popularity, name recognition, electability, likability and other factors.

For example, the race for the oddly shaped 3rd Congressional District—a seat vacated by Ben Cardin who is running for U.S. Senate—is distinguished by an unusually crowded pool competing from both parties. But the Democrats are fielding an excellent group led by Paula Hollinger, John Sarbanes, Andy Barth and Dr. Peter Bielenson.

The top job in Maryland—Governor—will not be battled out in the primaries, as neither candidate, Democrat Mayor Martin O’Malley nor Republican Governor Robert Ehrlich, Jr., faces any opposition from within their own ranks.

The outcome in the General Assembly is vital to maintain if not an absolute pro-lgbt posture, at least one that prevents a hostile environment for pro-lgbt causes, such as marriage equality, adoptions and partnership benefits. The record clearly shows that lgbt causes fair better with Democrats than Republicans, but not all Democrats have been on our side or helpful. Hardly any Republicans are, however.

One needs to pay attention to the candidates’ record and positions. As a guide, check out Equality Maryland’s website at www.EqualityMaryland.org for their endorsements at the state level.

The Senate contest to fill retiring Democratic Senator Paul Sarbanes’ seat is going to be one that is closely watched nationally. Indeed, NBC’s Meet the Press will be televising a debate between the two emerging rivals on October 29. Maryland, a "blue state" must retain the Democratic Senate seat, or any hopes of recapturing the Senate will be dashed.

Why is that important? If the Democrats wrest control of either the Senate or House of Representatives or both, they will be in a position to determine what legislation makes it to the floor for votes. They will also control committees, which influences legislation.

That will virtually guarantee that a constitutional amendment prohibiting same-sex marriage, for example, will never see the light of day under Democratic leadership. Moreover, progressive pro-lgbt bills like the Employment Non-Discrimination Act and repeal of the "Don’t Ask, Don’t Tell" military travesty have a better chance of advancing in a Democrat-controlled Congress.

While several Senate candidates with solid pro-gay stances are competing in the primaries, Kweisi Mfume and Rep. Benjamin Cardin are the presumed frontrunners to face Lt. Governor Michael S. Steele in November.

Mr. Mfume has pledged to oppose any attempts to amending the U.S. or Maryland Constitution that would restrict marriage to a man and a woman. Rep. Ben Cardin, while not overtly supporting same-sex marriage, still has a rather high pro-gay score of 77 during the 108th Congress as assessed by the Human Rights Campaign—the nation’s largest lgbt advocacy group.
Although some gays prefer Mfume because he would seem like a more actively supportive advocate in Congress, others see Cardin as the best chance to defeat the anti-gay Michael Steele head-to-head.

The primary elections will also feature contests for state Comptroller, Attorney General, all Congressional seats, the entire General Assembly, local judges, boards of education, sheriffs, etc.
To be sure, gay issues are under the radar in Maryland this election cycle as other matters have a higher priority for voters. Nonetheless, the Maryland Appeals Court will eventually hand down its decision on the Deane and Polyak v. Conaway lawsuit that has challenged the constitutionality of the state’s marriage laws.

A Baltimore Circuit Court judge ruled favorably for the plaintiffs. If the Appeals Court upholds the ruling, we can expect a backlash from conservative lawmakers and a constitutional amendment restricting marriage to one man and one woman will undoubtedly be sought. That is a compelling reason to participate in both the primary and general elections to ensure that lgbt or lgbt-friendly officials are elected.

Posted by Steve Charing at 4:36 PM