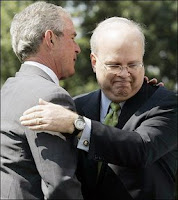 Bush’s brain’ exploited gay families for political gain at election time.
Friday, August 17, 2007
by Steve Charing
KARL ROVE, THE principal political strategist for President Bush, has decided that he must spend more time with his wife and son and will step down from his White House post at the end of the month. That was the official reason given. He is leaving under a shadow of legal and ethical questions and is least partially to blame for the huge political defeat of the Republicans in 2006.
In bailing, Rove is joining the growing list of other top officials who have wisely found lifeboats to escape the sinking ship known as the Bush administration.
Of course, former Secretary of Defense Donald Rumsfeld was forced out following the 2006 elections because he would never leave on his own accord. Someone high up in the administration must have concluded that the dismal showing for the GOP last November may have had something to do with the mismanaged war in Iraq. That person may have been Rove, who reviews significant policy decisions through the lens of politics.
Rove gained his national reputation for orchestrating the successful 2000 and 2004 election campaigns of George W. Bush. Dubbed “the architect,” Rove’s strategy involved stoking the emotions of religious and social conservatives and luring them to the polls.
He estimated that some 4 million evangelicals, who mostly vote Republican, failed to participate in the presidential election of 2000. A light went on above Rove’s head when the Massachusetts Supreme Judicial Court ruled in early 2004 that barring same-sex couples from marriage violated the state’s constitution. Same-sex marriage had, in fact, become a reality to the consternation of social conservatives.
ROVE SAW THE opening, and he would cynically use the court’s decision to frighten America about the ramifications of gay marriage. He had indeed discovered the right tool to prod the evangelical voters to come out and vote for the incumbent president who vowed to protect the sanctity of marriage and to define it as a union between a man and a woman.
To capitalize on the lightening-rod issue of “gay marriage,” the nefarious Rove oversaw the placement of amendments that would ban same-sex marriage on the ballots of 11 states during the run-up to the 2004 election. Some of these were crucial “battleground” states like Ohio. The thinking was if they can motivate the religious conservatives on this issue, they would flock to the polls to vote against gay marriage and continue to vote Republican on the rest of the ballot.
Rove succeeded in this endeavor aided by his shameless use of scare tactics. He helped to get the message out by spreading fear, such as the notion that gay marriage would ultimately lead to marriage with animals, multiple partners, etc. This hyperbole was expected to resonate with an ill-informed population.
Anti-gay marriage rhetoric spewed from the pulpits of America’s churches during the height of the 2004 campaign, especially in the amendment states. When the preachers weren’t denouncing gay marriage, printed literature was offered to the congregations warning them of the consequences.
AND ROVE WASN’T satisfied with simply fomenting anti-gay attitudes among the evangelical Protestants. His message was also aimed at creating a furor among Catholics.
Rove, moreover, designed a cynical campaign to use gay marriage as a wedge issue among Democrats by alarming African Americans in particular. Radio announcements on African-American stations were heard in Detroit, for example, that warned that gay marriage would lead to men kissing near their houses.
Many political analysts believe (although there are no clear data to support it) that Ohio landed in Bush’s column because of the gay marriage issue and Rove’s management of it. The fact that the amendment was on the state’s ballot attracted many more social conservatives to the polls than might have otherwise participated. It could have been the deciding factor.
Rove was as much known for utilizing fear than any other component of election strategy.
In promoting fear of same-sex marriage, Karl Rove did not hesitate to exploit gays and their families to win an election. As he bails from the White House, his legacy will be a dark, cynical stain he left on our community.
Posted by Steve Charing at 9:58 AM

I could personally physically hurt this bastard Rove, since I consider him to be an enemy of the state. He has harmed this country in ways that no terrorist ever could. I believe that for America to recover, we must punish the architect whose plans brought us so low. This applies to his minions and his puppet president as well.

I would only add that I firmly believe Ohio was ultimately delivered to Bush in the 2004 election courtesy of Diebold. The vote there was amazingly close, even considering Rove's dirty tricks and Republican manipulations at the polls. I think the Diebold machines actually tipped the balance. After all, Diebold's president had actually said before the election that his "job" was to deliver Ohio to Bush.

You probably are starting to notice in the news that what once appeared to be an oncoming tidal wave of Diebold voting machines in every precinct in the country, is now washing back into the sewer from whence it came. Good riddance.

There were myriad theories and explanations regarding the vote in Ohio including the inadequate number of polling stations in Cleveland--a Democratic stronghold--resulting in long lines. I look at the numbers and see that Bush received 51% of the vote to Kerry's 48%. Then I note that the amendment that banned same-sex marriage passed 62% to 38%. Assuming the vast majority of the amendment voters supported Bush, I can derive that the turnout for the amendment may have pushed Bush over the top. It's just another possibility.