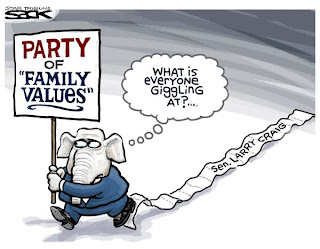 Craig scandal reinforces stereotypes as pro-gay bills advance in Congress.
By Steve Charing
Following the revelation of Senator Larry Craig’s toe-tapping toilet tango, the blogosphere and the gay press lit up with cries of hypocrisy on the part of Sen. Craig in particular and conservative Republicans in general.
They demanded to know how a man who spent his public career opposing rights and equality for gays and lesbians could be caught engaging in homosexual behavior. How can the party that professes to be morally correct at every turn and preaches righteousness to everyone else produce yet another wayward officeholder?
Oh, to be sure, there was enough hypocrisy to cast a thick layer of dye over the red states. Sen. Craig’s laughable denial that he is not gay and never was gay is the starting point. It was obviously so important to reassure the citizens of Idaho and the nation that the lowest of the low—being homosexual—is something he is not, and he repeated it three times during his lame press conference.
He accused the Idaho Statesman, the largest newspaper in the state, of pursuing a witch hunt even though his sexuality has been the subject of rumors for a quarter century. Yet, if the Statesman’s disclosures and conclusions were untrue and the facts incorrect, why didn’t Sen. Craig file a lawsuit for libel?
Then the hypocritical Republican members of Congress and some presidential candidates argued that since Sen. Craig had pleaded guilty to a crime, he is not worthy of holding office. The fact that President Bush in an earlier life pleaded guilty to drunken driving must have eluded them.
Immediately the Senate Ethics Committee planned to look into the matter. "I think it's important for Republicans to step out right now and say, 'No, this behavior is not going to be tolerated,’" Rep. Pete Hoekstra said.
Indeed, Republicans were swift to throw Sen. Craig overboard prior to the investigation because of this type of sexual behavior, but made no such effort to toss Sen. David Vitter whose phone number appeared on an escort service list. Apparently, heterosexual sex scandals, unless it involves someone whose name is Clinton, aren’t as nefarious as homosexual scandals.
Yes, there was plenty of hypocrisy, and a lot of gay activists took joy in seeing such a wretched foe squirm on the hot seat. But what is needed was for the gay media and leaders to step forward and stem the tide of assumptions sweeping a naïve nation that restroom sex is a routine activity for gay men.
News talk shows delved into the culture of restroom sex or sex in public places like parks. They tried to cover it from a legal, social and clinical point of view. But regardless of what was said during the chatter, the perception is that this type of activity is popular among gay men.
It is true that gay men do participate in these activities particularly when there are limited alternative options where sexual liaisons may occur. Or they do it for the thrill of seeking anonymous, risky sex. Police and other authorities will tell you, however, that half, if not more, of these encounters take place with otherwise straight men who are married and seek male sex partners on the down-low.
As with Sen. Craig, these men consider themselves to be straight but engage in homosexual sex. They are, for the most part, closeted homosexuals living a predominantly heterosexual lifestyle. And like Craig, they do not consider themselves to be gay; they simply enjoy sex with other men.
This scandal unfortunately elevated the subject of tawdry, public restroom sex to a national level.
With important legislation, such as ENDA and Hate Crimes swirling around in Congress and the repeal of "Don’t Ask, Don’t Tell" gaining some traction, the last thing gay men need is for this episode to fan the stereotype flame that they will go anywhere—including public restrooms—to meet total strangers for sexual encounters.
As was the case with the Mark Foley congressional page scandal last year, which led a skeptical and uninformed public to believe that gays are child-molesting predators, the fallout from "Toilet-Gate" could also be damaging. The gay media and activists responded swiftly by reporting that the Journal of the American Medical Association found that 98 percent of male pedophiles are heterosexual.
Once again, we need to move swiftly and effectively to quell the stereotype and do some damage control.
Posted by Steve Charing at 4:07 PM