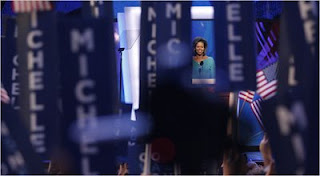 After Ted Kennedy's moving and inspiring speech, it was difficult to imagine how Michelle Obama could have pulled it off. But she certainly did! With style, elegance, intelligence and being a down-to-earth woman steeped in family values, Michelle soared to the top of the list as far as role models is concerned. Barack, you did well!
She's no more an angry black woman than John McCain is.
Posted by Steve Charing at 10:09 AM