It's the Stupidity, Stupid! 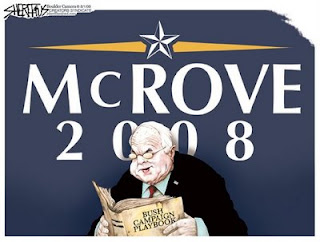 Karl Rove knew what he was doing during the 2004 presidential campaign. The newly formed Department of Homeland Security following marching orders from the Cheney-Bush war machine issued frequent color-coded terrorism warnings during the final few months of the campaign.

Not there were any imminent threats, but the constant reminders were a ploy to scare the voters into believing that only George W. Bush could protect the American people from a terrorist attack. Lost in this is the fact that the attacks on September 11, 2001 occurred nearly 9 months into the first Bush term. Not much protection W.

Rove and other GOP strategists acknowledged that the key to winning the reelection of a totally inept incumbent is to prey on the fears of an astonishing large number of American voters.

Besides those faux terror alerts they employed other scare tactics, especially in such battleground states as Ohio. Fear of two gay men kissing a few houses down the street ignited the hysteria over "gay marriage," thus pulling otherwise indifferent voters to the polls to register their contempt of such a horror.

These homophobes and so-called social conservatives voted Republican. Despite voting against their best economic interests, (and they see now how such a ghastly election outcome could, in fact, be ruinous) they chose to keep Kenny and Michael from getting hitched.

Sad to say, there are too many stupid people in this country. Many of these still believe Saddam Hussein attacked us on 9/11. They are quick to buy into the simplicity of quick fixes and fall victim to hype and believing the smears leveled against a candidate. And the GOP whose brand is equal to anthrax or worse, Exxon-Mobil, must exploit the stupidity of the voters or at least their lack of education.

Senator John McCain was once a politician who would eschew those tactics. Not anymore. Karl Rove’s protégé now heads up his campaign, so fasten your seatbelts.

A barrage of GOP-produced negative ads, floating over the airwaves, the Internet, You Tube and news-hungry broadcast and cable television channels are designed to malign Senator Barack Obama as part of Rove’s Fear and Smear playbook. They have no other choice because of the Republicans’ swampy reputation after two terms of Bush and their lack of vision for the future.

Throw money at the stupid voters who cannot discern a snake oil deal when it is right before their eyes. Give them a "gas tax holiday" that will save them a relatively miniscule amount. Nevermind that the transportation fund is already hurting from the diminishing tax revenue caused by reduced driving.

But that’s OK. The GOP will tell the stupid voters to blame liberal Democrats (especially their convenient straw man Bill Clinton) for any future structure failure involving hundreds of bridges. It’s worth saving those $30, right?

Now the new fraud is offshore drilling. "Drill more oil, dammit, so that these sky-high gas prices will go down!" Right. McCain used to be opposed to offshore oil drilling. But he knows voters are stupid and will buy into a quick fix. In fact, a shocking 70 percent have.

What goes unsaid is that there is not a supply problem concerning oil. The prices have been shooting up until very recently as a result of a combination of complex factors including speculation, geopolitics and the weak dollar.

Moreover, the effects of newly found crude oil should there be such discoveries would not have an immediate impact on prices, but an uninformed public still believes in miracles.

Prices have recently come down some as a result of reduced driving and more cautious speculative activity because Congress is beginning to get serious about containing it. The price of gas has fallen because of reduced demand, not increased supply.

It doesn’t matter what the issue, the stupid voters are in the Republican fear and smear sights. They are fed the mantra, "the surge is working" over and over until it oozes out of their ears.

They are exposed to ads that link a Harvard educated charismatic leader to vacuous celebrities to mock the idea that just maybe Barack Obama stands for something that the rest of the world appreciates.

The stupid voters seem to prefer one of their own.

When an amazing 9-country tour brings nothing but praise and hope from the international community, but it is derided and mocked by a jealous Republican presidential campaign, you know who the target audience is.

It’s the stupidity, stupid!
Posted by Steve Charing at 5:17 PM