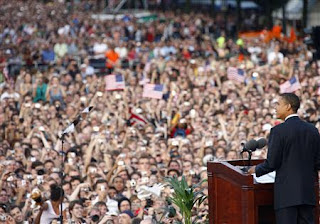 As Sen. Barack Obama continues on his picture-perfect trip through the Middle East and Europe, the petulance and pettiness of the McCain camp is breathtaking. It was McCain with the help of the RNC who chided, prodded and taunted Obama for not ever visiting Iraq (and a negative ad that states that remarkably still airs). But the success of this "high-risk" mission and the childish responses coming out of Camp McSame have diminished what was once a decent politician to that of an over-aged adolescent who throws tantrums because he doesn't get things to flow his way.
Blaming the Media. Aww poor John McCain can’t get media attention while Obama dazzles world leaders, our own troops and huge throngs on foreign soil. When a representative of the U.S. speaks to tens of thousands of Berliners, which garnered world attention, Camp McSame cannot understand why? It wasn’t long ago that President George War Bush had to be literally sneaked into London under the cover of darkness just to speak to Queen Elizabeth II. And Britain is our closest ally!
Again, you get what you ask for. Camp McSame pushed Obama to visit Iraq, and he will return home triumphant. Not such a great strategy on their part.
Learning Curve? John McCain criticized Obama’s trip by saying, "In a time of war, the commander-in-chief doesn’t get a learning curve." Maybe so, but McCain’s constant flubs concerning Iraq and the Middle East make George War Bush seem knowledgeable.
His confusion of Sunni and Shi-ites is unbelievable considering his self-expressed expertise of the area. His comment that Iran trains al-Qaeda when in fact it doesn’t was another example of lack of knowledge despite his many trips to the war’s theater.
Then there is his mistaken chronology of events with respect to the surge and the Anbar Awakening and his notion that the surge caused this event. Like a parrot who had his seeds laced with a banned substance, McCain repeats and repeats over again, "The surge is working. The surge is working." But he cannot define what success in Iraq actually means, and he ignores the other factors, such as the Anbar Awakening, for the reduction in violence.
And one can throw in his utter disregard for history when he referred to the Czech Republic as Czechoslovakia on several occasions. Adding more to the heap is McCain referring to a non-existent Iraq-Pakistan border. McCain is the foreign policy and national security expert? And someone PLEASE tell me what qualified Ronald Reagan to be commander-in-chief when he ran for President!
McCain is also seething over Iraq Prime Minister al-Maliki for his moving closer to Obama's timeline for a troop withdrawl.
Obama and Rising Gas Prices. In an incredible display of dishonesty and stupidity, Camp McSame launched an ad that actually blames Obama for the rise in gas prices. This is a head scratcher if I ever saw one. How low will they go? Answer: see below.
Portraying Obama as a Traitor. This cops the award for flagrant smearing. McCain said and said again that Obama would rather lose a war so that he can win an election.
The fact that this jackass is even competitive speaks more about the voters in this country than anything else. Hopefully, Obama's presence on the world stage will help America see the light that he is a plausible and much-needed President of the United States.
Posted by Steve Charing at 3:31 PM